Amarok is my favorite music player and yesterday, it just got a lot better.

The first beta of Amarok 2.4, codenamed "Closer" was released yesterday. It has a number of improvements and bugfixes. It is also available for Kubuntu 10.10 and 11.04.

Of all the new features in this release, the one I like most is the one which makes it possible to write tags directly to the files. This allows for the addition of statistics, album arts etc. to the file itself directly from Amarok. It also supports mass tagging using Musicbrainz through a new user-interface. 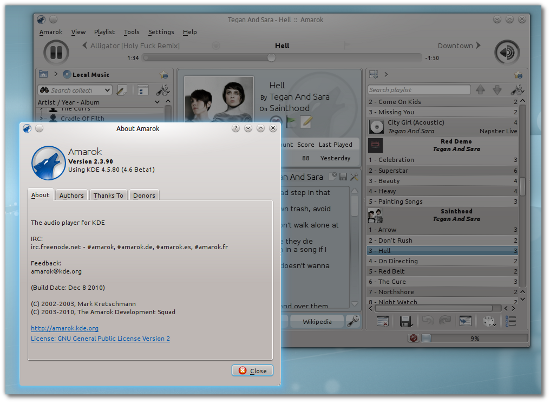 Amarok 2.4 Beta 1 also supports transcoding of audio files from one format to another. Currently it works with only local files; it will be extended to media devices as well later. The library scanner has also been rewritten from scratch to provide a more robust detection of compilations.

Warning: The instructions given below is meant only for testing. Do not do it on a production machine, it may break.

If you have already installed KDE SC 4.6 Beta 1 and you still have the Kubuntu Beta PPA, all you have to do is open the Konsole and upgrade the system or install Amarok.

If you have removed the Kubuntu Beta PPA or are still on a previous version version of KDE SC, open the Konsole and execute the following:

Note: If you are using KDE PIM 4.6 beta packages, these instructions will most certainly break your system.

You can read more about the changes in Amarok 2.4 Beta 1 here.