You Are Here: Home » Gaming » Miscellaneous

Well, do we need to introduce Angry Birds to you? Being one of the most popular mobile games on iOS and Android platforms, nothing stopped it from getting onto the question paper of a Mathematics or most probably Physics exam at a school.

Angry Birds game is a perfect way to put one's Projectile Motion concepts of Physics to good use. The question goes something like this:

In the popular game Angry Birds, in order to make sure the red bird can hit the green pig, what should be the launch angle (respect to horizontal) of the slingshot if the time of the flight is 2.50 seconds? 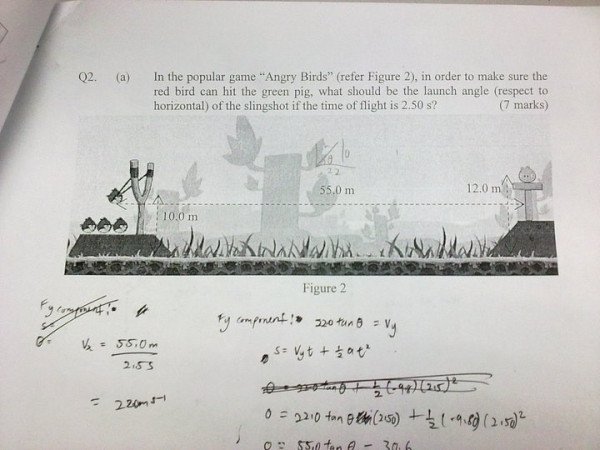 The question carries 7 marks and is no doubt an important one :P. These kind of questions involving the projectile motion were very common when I was a student of Physics back in college.

If you are an Angry Birds fan then you must see this video which talks about how the various levels in the Angry Birds game is made.

via Imagevat. More on Projectile Motion