If you are using GNOME Shell, you would have no doubt noticed that the windows have only a close button and no minimize and maximize button. Although, this is part of a new design principle in GNOME Shell, it can be a bit disorientating for some. In this article, we will show you how you can get back the minimize and minimize buttons without too much of a fuss.

Note: Ubuntu 11.04 might want to refer to this tutorial if they want GNOME 3.

To put back the minimize and maximize buttons, we will use an application called Tweak Advanced Settings. It is available for both Ubuntu 11.04 and Fedora 15. Open the Terminal and execute the commands given below: 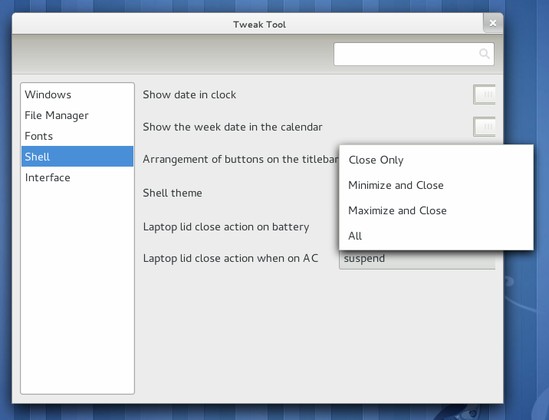 After installation run the application and go to click on Shell. In the drop down menu for Arrangement of buttons in the title bar, pick All.

Now press ALT+F2, enter "r" (without the quotes) and hit Enter. Your windows should have the minimize and maximize buttons now.

The Tweak Advanced Settings tool can also be used to do a lot of other stuffs such as changing the font, changing the theme etc.

How To Add Minimize And Maximize Buttons In GNOME Shell [Ubuntu & Fedora] was originally published on Digitizor.com on May 30, 2011 - 3:08 am (Indian Standard Time)