No Need Get Excited About Steam On Linux Again!

The Steam on Linux rumor is up and running again.

A couple of weeks ago, Valve has officially made it clear that they are not developing a Steam client for Linux. This came as a big surprise for a lot of people who had been expecting it, after all there were reports of the Mac client containing Linux codes.

Well, whatever those codes are doing there, Valve has made it pretty clear that they are not working on a Linux port of Steam at that moment. I see no reason to question what Valve has said. They have never lied straight at our faces as far as I can remember.

Anyway, it seems like people still want to believe that Valve is working on Steam. They are now referring to a job posting in the Valve website which says one of the responsibilities is "Port Windows-based games to the Linux platform". Here is a screenshot: 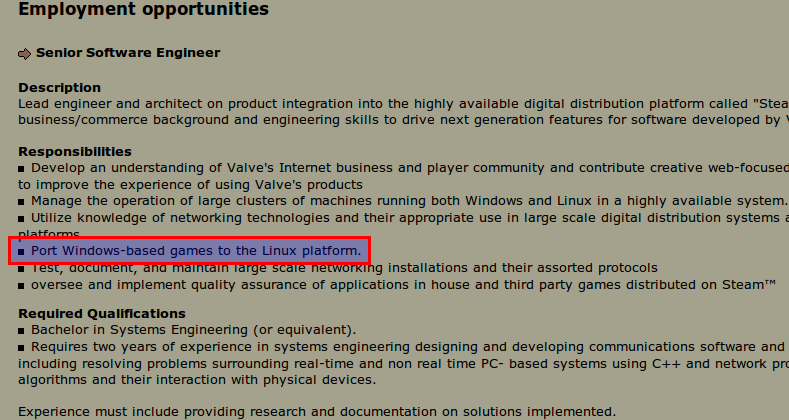 Sounds like they are indeed looking to start working on Linux, right? Well here is the bummer - That posting has been there for three years. Yes it is not a new posting, it has been just lying there for three longs years. You can check it here if you want -> Internet Archive Way Back Machine.

This started probably after someone posted that in Reddit and in reply someone also pointed out that it is three years old, with the link I just posted above.

Yes I know that we want to have Steam in Linux. But rather than getting excited, this makes me sad. The fact that the job posting has been there for three years means that either Valve is not hiring anyone (Then why put up the job posting? To please the Linux community?) or that no one is applying. Either way this does not mean anything in the current circumstances, I am afraid.

Valve might bring Steam on Linux in the future. They have not said that they will never develop it. But right now, there is nothing to be excited about.

What do you think about this? Leave a comment.

No Need Get Excited About Steam On Linux Again! was originally published on Digitizor.com on September 2, 2010 - 10:24 pm (Indian Standard Time)