Pokemon has been one of the super hit games on the Nintendo gaming platform. Now, the developers of the original Nintendo - Pokemon game are planning to launch the Pokemon game on the Android, iOS platforms and why should not they. 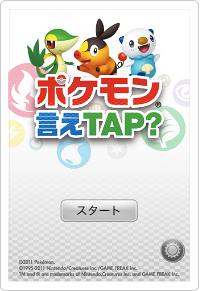 Apple's iPad & iPhone have already been proved as formidable gaming devices and Android powered devices are catching up gradually. Porting the game to Android & iOS platforms will help the developers get a huge user base for their superhit Pokemon game.

The developers of the Pokemon nintendo game have made an announcement on their official blog that they are going to launch a game app called "TAP said Pokemon?", this summer. They have also mentioned that the games will be made available for free both in the Apple App Store and the Android Market.

Pokemon is a famous card based game for children and already has a lot of fan following from the animated TV series. So, when this game comes to the Android and iOS platforms, we feel it will pose a challenge to Angry Birds or The Heist which are currently the most popular games on both Android and iOS platforms. What do you think? Let us know about your opinion in the comments below.

Here is a chart describing the currently supported Android and iOS devices as the game development proceeds: