You Are Here: Home » Microsoft » Mobile 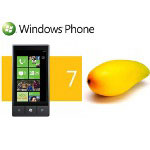 At Microsoft’s annual TechEd conference for developers and IT pros, was announced that Windows Phone will see a major change in its capabilities in its next version named "Mango” and supposedly will release later this year. The features are meant to provide a productive edge on the go to users.

Some of the features that will be included :

These features really sound promising. There are more of the features to be revealed in near future. Certainly, this time Windows Phone has planned to take the market by storms. Lets wait and watch till the phone hits the market.

Windows Phone Mango To Add Many Exciting Features was originally published on Digitizor.com on May 18, 2011 - 4:09 pm (Indian Standard Time)