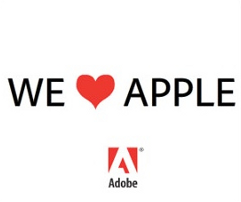 Adobe has responded to Apple CEO Steve Jobs' thrashing of Adobe and Flash with an ad campaign that says "We [Heart] Apple". This ads leads to a statement from Adobe and an open letter from Adobe founders Chuck Geschke and John Warnock.

This is what the statement says:

Openness is at Adobe's core. Our first technology was an open standard that liberated publishing from proprietary printing systems, and soon afterward our PDF technology eliminated barriers to sharing documents across platforms.

We believe open markets that allow developers, publishers, and consumers to make their own choices about how they create, distribute, and access content are essential to progress. That's why we actively support technologies like HTML4, HTML5, CSS, and H.264, in addition to our own technologies.

In their open letter, Adobe Co-founders Chuck Geschke and John Warnock said that by taking the opposite direction of their "open" system, they are potentially hurting creativity and impeding "the next chapter of the web".

This is what they wrote:

We believe that Apple, by taking the opposite approach, has taken a step that could undermine this next chapter of the web — the chapter in which mobile devices outnumber computers, any individual can be a publisher, and content is accessed anywhere and at any time.

While it is an interesting reply from Adobe, one cannot help but wonder if Adobe is really as open as they are making themselves sound.

Adobe Counters Apple’s Hate With Love and “Openness” was originally published on Digitizor.com on May 13, 2010 - 8:44 pm (Indian Standard Time)