Will Android Tablets Ever Overtake iPad ? 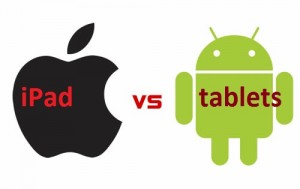 Undoubtedly, iPad and iPad2 have ruled the tablet market. With the exception of very few other, these two were the only two tablets available widely. With the increase in popularity of Android tablet, there has been air of discomfort for the iPad market. Though the iPad is still ruling in many aspects, Android tablets are starting to give it serious competition. It is getting hard to decide which of these two will be leading the market. Let's take a look and compare features of both these different worlds before we draw any conclusion.

Motorola Xoom is the first tablet to be released with Android 3.0 which has been developed for tablets. Its features are nearly comparable to that of iPad's. Both of the tablets offer features potentially and equally well. However, price of Xoom is more than that of iPad's. Xoom was not a fair start for Android's tablet market.

Another tablet, Samsung's Galaxy Tab 10.1 looks like the true iPad competitor that Android fans have been waiting for. Its features give a strong competition to that of iPad's. Let us compare the features

These two tablets give a serious fight to each other. However, Galaxy with its better features looks stronger than Apple iPad 2.

Android has got tremendous features to provide. With so much innovations involved, this is one big advantage for growth of market of  Android tablets. Let's take a look on the features of iPad and Android tablets.

This is where iPad stands as winner by a huge margin. There are reportedly 60,000+ apps for Apple's iPad at this time against very very less numbers of Android tablet apps. Developers have shown more interest in developing iPad's apps.  Because Android (Honeycomb) tablets can also use most android phone apps, this is quite a supportive fact for Android tablets. But this won't help in long run. Google needs to be very serious regarding this fact if it wants a lead in the market.

The iPad has got a huge commercial success. As of now, Android tablets stand nowhere near market position of iPad. But a lot of new tablets are going to be introduced to the market in coming times. Excitement around the Android tablet  is incredible. Though the tablets had a slow start, market is showing good response to these tablets. With more Android tablets making it to market, the iPad may soon be just another tablet. Apple will have to take some steps to make iPad fight against Android tablets and keep the competition growing.

But I would like to mention the fact- iPad is a single entity against the whole big world of Android. iPad will always give a head-to-head fight to all of the Android tablets combined together.

Will Android Tablets Ever Overtake iPad ? was originally published on Digitizor.com on June 5, 2011 - 3:29 am (Indian Standard Time)