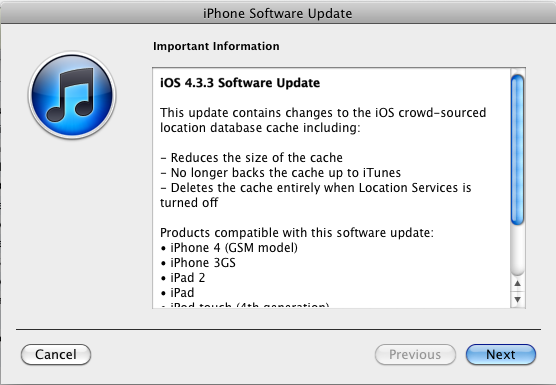 Remember the furore over the discovery that iOS devices has been keeping track of the user's locations? It was discovered around two weeks ago and it took Apple another one week to acknowledge it and called it a bug (although there were evidences that they were trying to patent it).

Nevertheless, Apple has released an update - iOS 4.3.3 - which fixes this "bug". With the update, the size of the log file has been reduced. Earlier, the log held upto almost a year's worth of data. With the update the data are held for a much shorter period. Another thing Apple has changed with this update is that iTunes no longer takes backup of the log. However the biggest change is that the log is deleted completely if the user decides to turn off location services. When it was discovered, the data was collected and written to the log regardless of whether the user has disabled location services or not.

Although it took a lot of time and lawsuits to acknowledge that the problem exists, the fact that they have fixed the issue in a week should earn them some brownie points.

Apple Fixed iOS Tracking “Bug” With An Update was originally published on Digitizor.com on May 5, 2011 - 2:05 pm (Indian Standard Time)