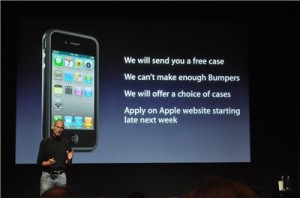 So finally its confirmed. At the Apple Press Conference today, Steve Jobs has announced that they are giving a free to everyone Bumper to everyone who has bought the iPhone 4 till 30th September. iPhone 4 customers can start applying for the free Bumper at the Apple website next week. Those who have already bought a Bumper will be refunded.

Apple cannot make the Bumpers fast enough. So, they are going to give away third party cases if the users want them. Jobs also said that users can send back the iPhone 4 within 30 days of purchase, if they are not happy with it, for no restocking fee.

Here are some of the other things he mentioned: