Does using open sources software make you a pirate? 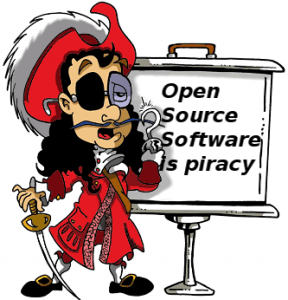 According to the IIPA, an umbrella group for organizations like MPAA and RIAA, using open source softwares make you a pirate. Andreas Guadamuz, a lecturer in law at the University of Edinburgh, has discovered that an influential lobby group is asking the US government to basically consider open source as the equivalent of piracy.

The International Intellectual Property Alliance (IIPA), has requested with the US Trade Representative to consider countries like Indonesia, Brazil and India for its "Special 301 watch-list" because they use open source software.

The Special 301 watch-list is the list of countries that the US government considers to be against capitalism. It often gets wheeled out as a form of trading pressure - often around pharmaceuticals and counterfeited goods - to try and force governments to change their behaviors.

Last year the Indonesian government sent around a circular to all government departments and state-owned businesses encouraging the use of open source software. The IIPA suggested that Indonesia deserves Special 301 status because encouraging (not forcing) such steps "weakens the software industry" and "fails to build respect for intellectual property rights".

Here is what the IIPA recommended:

The Indonesian government's policy... simply weakens the software industry and undermines its long-term competitiveness by creating an artificial preference for companies offering open source software and related services, even as it denies many legitimate companies access to the government market.

Rather than fostering a system that will allow users to benefit from the best solution available in the market, irrespective of the development model, it encourages a mindset that does not give due consideration to the value to intellectual creations.

As such, it fails to build respect for intellectual property rights and also limits the ability of government or public-sector customers (e.g., State-owned enterprise) to choose the best solutions.

What the IIPA does not seem to know (or knowingly ignored) is that there plenty of businesses built on the OSS model (RedHat, WordPress, Canonical etc). Moreover it is absolutely baseless to imply that simply recommending open source products - products that can be more easily tailored without infringing licensing rules - "undermines" anything.

Does using open sources software make you a pirate? was originally published on Digitizor.com on February 25, 2010 - 4:04 am (Indian Standard Time)