At a special event at its headquarters in Palo Alto, California, Facebook CEO Mark Zuckerberg has confirmed that Facebook now has 750 Million active users. He also announced that Facebook has observed that the rate at which its users are sharing is increasing at an exponential rate.

He added that Facebook had not thought of announcing this thing before as this would not prove anything regarding user engagement. Nearly a year ago Facebook had announced that it reached 500 million users but it take a long time for this  information to come out. Facebook assumes that it will soon reach 1 Billion mark very soon.

Facebook users now share things twice as much as what they used to share a year ago and this number is expected to increase two folds in the next year. Zuckerberg also added that users are now sharing 4 billion ‘things’ on Facebook every day a rate which is increasing exponentially.The things include pictures, videos and others. 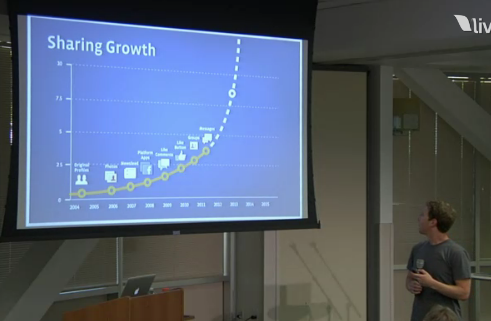 The graph above shows how the sharing is increasing at an unbelievable rate. If this continues to increase at such a huge rate, imaging a situation when Facebook will be having more users in coming times. Things are going to get really big for Facebook and the company is surely seeking more attention form the users.