We have recently come across a post which shows how many websites and businesses are wrongfully using CSS and styles to trick users into liking their Facebook fan pages. In this trick, a fake cursor is used to get the user click on a Facebook like Button using the CSS property cursor:none. Thanks to Jack Shepherd who has brought this to notice of millions now.

Less do the users who actually use such tricks to raise their Fanpage counts know that if they are clever Facebook and its engineers are 100% more clever than them. The Facebook Like button has a cool confirm feature. So, this is how it works. If Facebook detects that a Facebook Fan page, which is embedded inside a 3rd party website, receives abnormally huge number of likes in a short period of time, then it throws another interaction layer in the form of confirm.

After clicking the Like button, users are shown a Confirm link, clicking on which opens another new window on Facebook that ask you whether you actually like the Fan page! Check out this screenshot below: 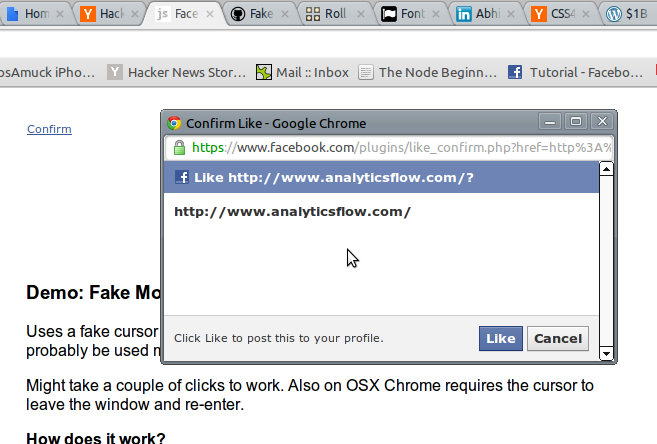