Update: Do Not Install this. There are some indications that this could expose users to security vulnerability.

To get the Facebook stream in Google+, we will have to use an extension/plug-in called Google+Facebook. This plugin is available for Google Chrome, Mozilla Firefox and Internet Explorer.

Here is a screenshot of my Facebook stream in Google+: 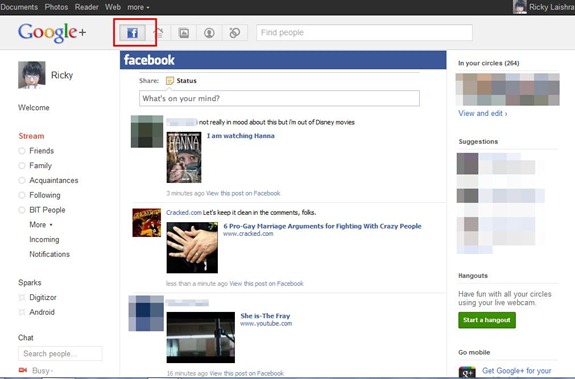 As you can see from the screenshot above, the plugin adds an extra Facebook button at the top to the right of the Home button. Clicking on it displays your Facebook stream inside Google+.

A limitation of this is that to interact in any way – such as like, comment etc. – you have to go to Facebook. Status update is handled through a pop up windows. Anyway, this is a good way to keep track of what is going on in Facebook while not leaving Google+.

To install the plugin, click on the link below and install it.

How To Get Your Facebook Stream In Google+ was originally published on Digitizor.com on July 10, 2011 - 1:11 am (Indian Standard Time)