You Are Here: Home » Reviews » Software

e tested the JavaScript performance of different web-browsers on a number of occasions. A common feature in all those tests was how slow Firefox's TraceMonkey JavaScript engine was. It always come somewhere at the bottom of all the tests. Even Konqueror with WebKit managed to outperform it.

Firefox 4.0 now has a new JavaScript engine called JaegerMonkey. JaegerMonkey is supposed to be much faster than TraceMonkey. In fact, it is. As usual we did the V8 Benchmark and the SunSpider Benchmark to compare the performance of TraceMonkey with the new JaegerMonkey.

In these tests, we are putting the Firefox 4.0 build with JaegerMonkey against Firefox 4.0 with the old TraceMonkey. The latest dev build of Chromium 7 and Opera 10.62 are also included. 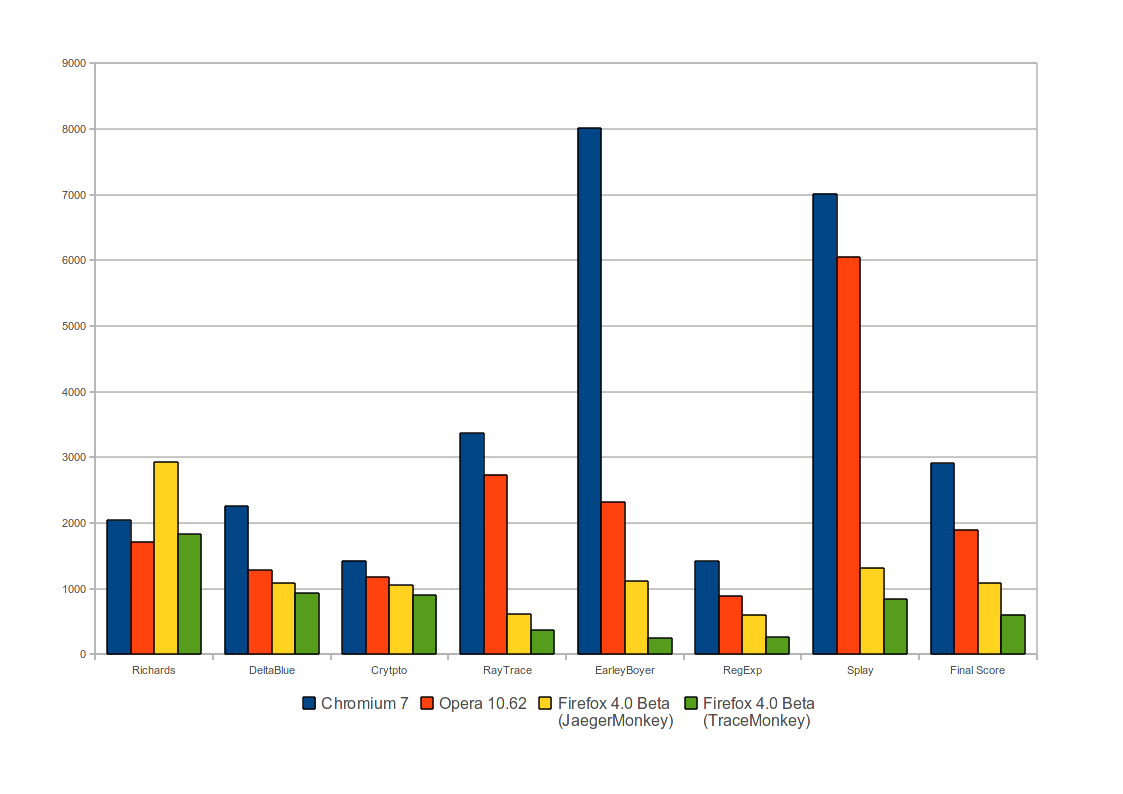 In the V8 Benchmark, higher scores are better. For this test, we ran the V8 benchmark five times and the arithmetic mean is taken and represented in the graph above.

However, when it comes to comparison with Chromium and Opera, it is still very far behind. Chromium is still the browser to beat for JavaScript speed. Interestingly, Firefox with JaegerMonkey scores way higher that all others in one of the tests.

It is still behind the fastest browsers around, but it is closing in. 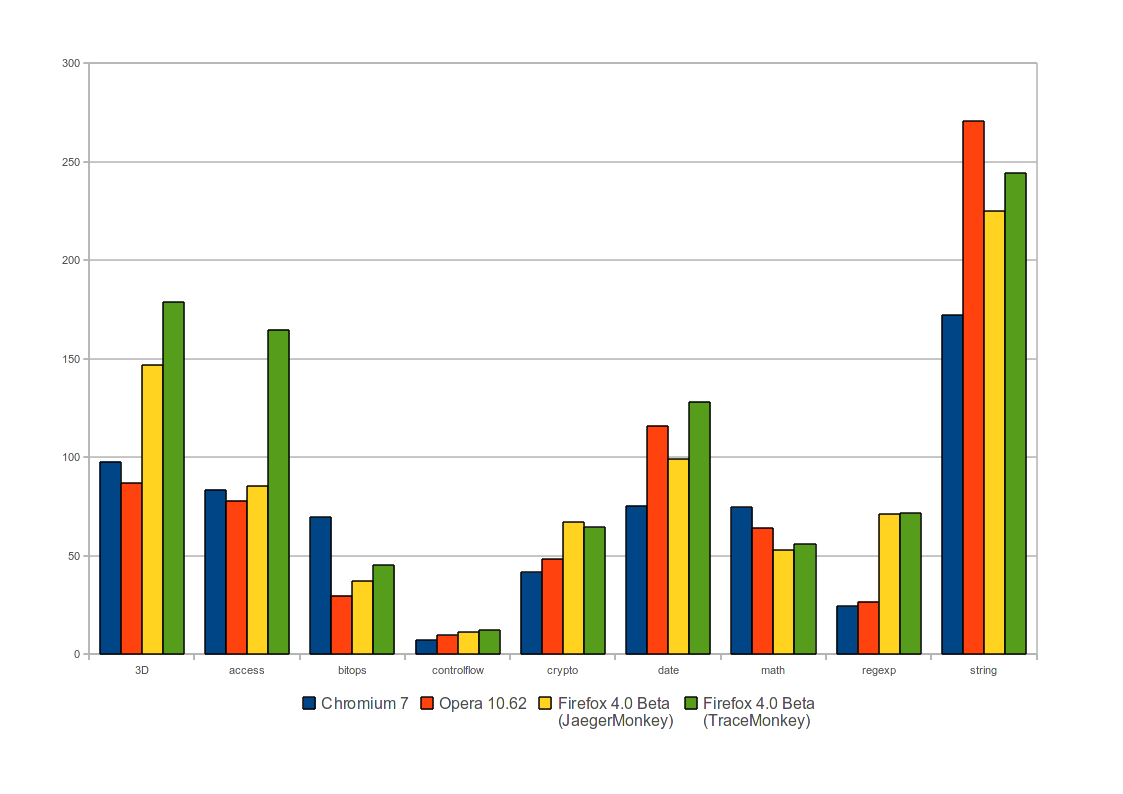 In the SunSpider test, lower scores are better.

Here, the results are quite mixed. No one browser completely dominates in this case. However, if you compare Firefox with JaegerMonkey and the one with TraceMonkey, JaegerMonkey is always a bit faster. All this will add up in the final time.

Here is the final time: 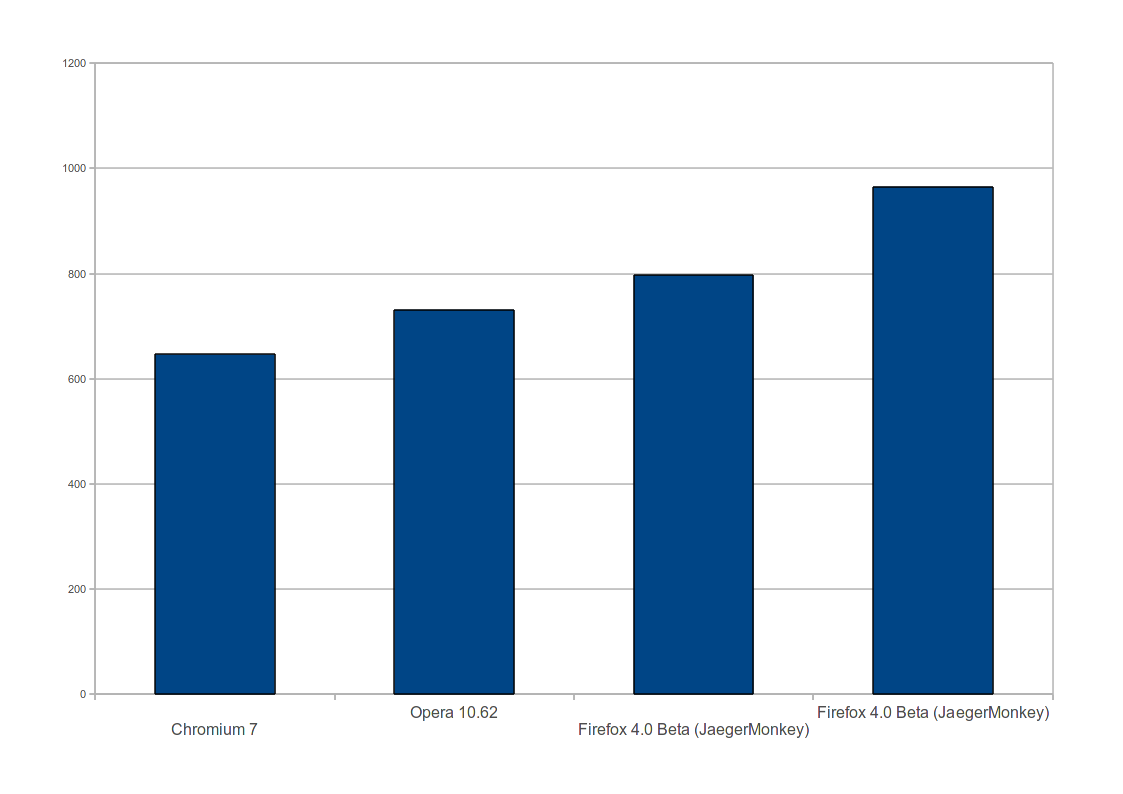 Unsurprisingly, Firefox with TraceMonkey is slower than that with JaegerMonkey and by quite a fair bit - around 180 ms.

Chromium is still the fastest, but the Firefox with JaegerMonkey is only around 150 ms slower. This is a great improvement from Firefox.

So, JaegerMonkey is indeed fast. It is much faster than the old TraceMonkey. However, Opera's Carakan and Chromium/Chrome's V8 are still faster. Nevertheless, JaegerMonkey is closing in big time.

Mozilla is optimizing the JaegerMonkey engine and it will be faster than what we tested today. However, it seem highly unlikely that they will be able to overtake either V8 or Carakan when Firefox 4 final is released.