Download Firefox 5 For Android: Updated With ‘Do Not Track’

Firefox beta for Android was launched in an alpha release in April 2010. Considering the privacy factor, Firefox for Android has been now updated with the ability for users to turn on the “Do Not Track” privacy feature also found in its full scale version. This makes Firefox the only mobile browsers which support privacy features.

With the introduction of this feature, user can have control over their browsing behavior and how it is being tracked and used online. When the Do Not Track feature is enabled (by clicking on “Tell sites not to track me”), Firefox will send information to advertising networks and other websites and applications that a particular user wants to opt-out of third-party tracking for purposes like behavioral advertising and accordingly the web usage can't be tracked back then. Of course, this requires the advertising networks to get on board with this idea - something they have not been willing to do.

In addition to the Do Not Track feature being added, Firefox has also gone for plenty of other performance enhancements, security updates, stability improvements for improvement of the overall user experience of Firefox on Android.

Many other issues will be addressed in future releases.

You can download Firefox for Android by clicking the link below or scanning the QR code on the right. 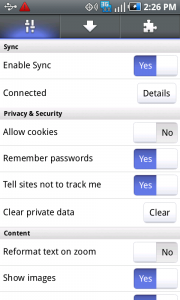 A look on how the Do Not Track turned on

Download Firefox 5 For Android: Updated With ‘Do Not Track’ was originally published on Digitizor.com on May 21, 2011 - 2:03 pm (Indian Standard Time)