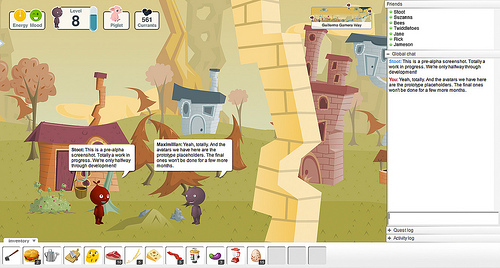 Here is what Stewart Butterfield said:

It’s called Glitch because in the far-distant and totally-perfect future, the world starts becoming less and less probable, things fall apart, the center cannot hold, and there occurs what comes to be called the “glitch” — a grave danger of disemprobablization.

This results in a time-traveling effort at saving the future, going back into the minds of eleven great giants walking sacred paths on a barren asteroid who sing and think and hum the world into existence and … you know what? You’ll probably just have to wait and play the game 🙂

Glitch is a browser based game and will be available free of charge by the end of 2010.