Fluent.io – Redefining email For The Future

Three Australians professionals, formerly working with Google have started a new email service called Fluent.io in an effort to redefine the future of emailing. Cameron Adams, Jochen Beknmann and Dhanji Prasanna have created Fluent for the purpose of helping people manage their email inbox 20% faster than normal. 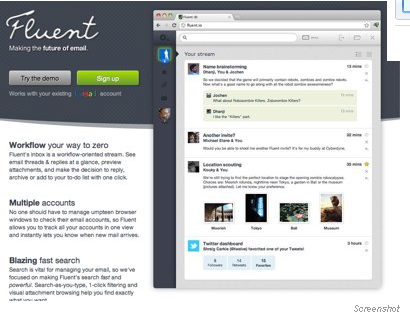 Previously having worked on Google Wave, they quit their work to get started on Fluent. For them, the main motive behind starting Fluent was the fact that email as a means of communication was getting “stagnated” and more had to be done to make email more in touch with the changing world. They hope that their product would work better than Google Wave with its added features and functionalities.

What Fluent does is actually quite simple. It turns one's Gmail account into a Facbook-like newsfeed where one can view attached images and documents in a slideshow format, and view emails sent to a common address in a timeline format. It also allows one to search his/her inbox according to time simply by selecting the particular contact and a time frame such as one week or one month ago and then view the emails sent and received in that period.

For now, Fluent is allowing only a few users as beta-testers. Once out of the testing phase, it will offer the basic email functionality for free or a small fee, and also have possible paid plans offering special features such as integration with third-party services like Google Docs or Dropbox and document collaboration.

Fluent.io – Redefining email For The Future was originally published on Digitizor.com on February 23, 2012 - 1:41 am (Indian Standard Time)