Ever wondered how much GNU is actually there in GNU/Linux? Well, the answer might surprise you.

Pedro Côrte-Real wondered the same and he went on to find out the answer. Using the main repository of Ubuntu 11.04 "Natty Narhwal" as an example, he counted the lines of code (LOC) of as a metric of the size of the projects.

According to his calculation, GNU makes up no more than 8% of the total lines of code of the software found in the Ubuntu 11.04 repository. In the calculation, GNOME, which makes up 5%, is not counted as a part of GNU. Some might object to that, but it actually makes sense because GNOME is largely run separately from the rest of the GNU projects. The Linux kernel makes up 9%.

The most interesting result from the study is, however, the percentage of other smaller projects. They make up for an amazing 56% of the total lines of code. Here is a pie-chart to illustrate the percentages of the different projects that makes up the Ubuntu 11.04 repository. 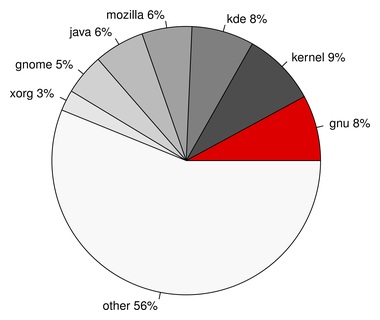 There Is Not Nearly As Much GNU In GNU/Linux As You Might Believe was originally published on Digitizor.com on June 2, 2011 - 10:53 pm (Indian Standard Time)