Google+ Estimated To Have More Than 10 Million Users

When Google's Executive Chairman Eric Schmidt was asked recently at a press conference about how many users were part of Google+ , he replied “I don’t know but it’s millions, it’s a lot.” Google also never came up with any estimated figure.

Paul Allen, founder of Ancestry.com, has been publishing his own estimates about the number of Google+ users on Google+ itself. According to his new estimate, there are now more than 10 million users today. This is just after two weeks since Google+ was launched. If the figure are considered to be nearly accurate, this make Google+ the fastest growing web product.

The method that Allen has used is a complicated and vague one. He gathered sample surnames from the Census Bureau and compared them to the surnames on Google+ to the popularity in the U.S. By using a sample of 100-200 surnames, he estimated the total percentage of the U.S. population that has signed up for Google+. He also made some assumptions about the proportion of this U.S. population to international users and came up with his estimate figure.

The method seems inaccurate but can surely help in getting an idea of the surging population on Google+. He might have not covered many surnames in his estimation. If more and more surnames are covered, the result may get more accurate. The end result can be surely little less than what he has predicted for now. Allen had earlier predicted a total of about 1.7 million users on 4th July and 4.5 million users on 9th July. The chart below shows the growth rate of number of users as per Allen's estimation. The growth rate surely is indicative of the huge popularity of Google+. 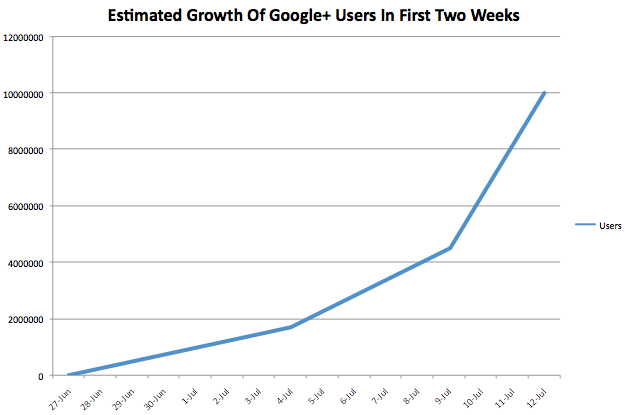 Google is yet to comment on anything like this. But one thing is for sure that Google+ has seen a huge popularity in very few days. We hope Google comes up with an announcement regarding number of users on Google+ very soon.

Google+ Estimated To Have More Than 10 Million Users was originally published on Digitizor.com on July 13, 2011 - 2:12 pm (Indian Standard Time)