It's hardly been three days since the launch of Apple's new messaging service for all iOS 5 devices - iMessage, Nokia has announced the launch of a similar device to device chat service for all users of Nokia handsets. The service is basically a new mobile application called "IM For Nokia" which users need to download from the Nokia Ovi store on their Nokia handsets and use it to chat with friends.

Well Well, with every mobile phone company launching their closed group messaging services, it will be interesting to see if HTC & Samsung too, launch something similar. Closed Group, Device-to-Device chat used to BlackBerry's forte (BlackBerry Messenger) and suddenly RIM, the company that manufactures the BlackBerry phones, has started feeling the heat.

Using the "IM for Nokia" application is very easy. You need to have a Ovi Mail / Store account in order to login to chat. However, the good thing is you can even chat with friends who do not have a Nokia phone as the app lets you add your Google Talk, Windows Live & Yahoo! Messenger accounts as well.

As of now the only way to get the chat functionality on your Nokia phones is to download the IM for Nokia app from the Nokia Ovi store. On, search on the Ovi store, we came across three different versions of the app:

Before installing either of the apps on your phone please verify if it is compatible with your phone version or model number. In general, the devices which support the app include Nokia X6, Nokia 5230, Nokia N8, Nokia E7 and some more. Surprisingly, the app runs on all Symbian Series 40 phones too. And Nokia says that they will soon pre-install the app on to many Nokia devices. 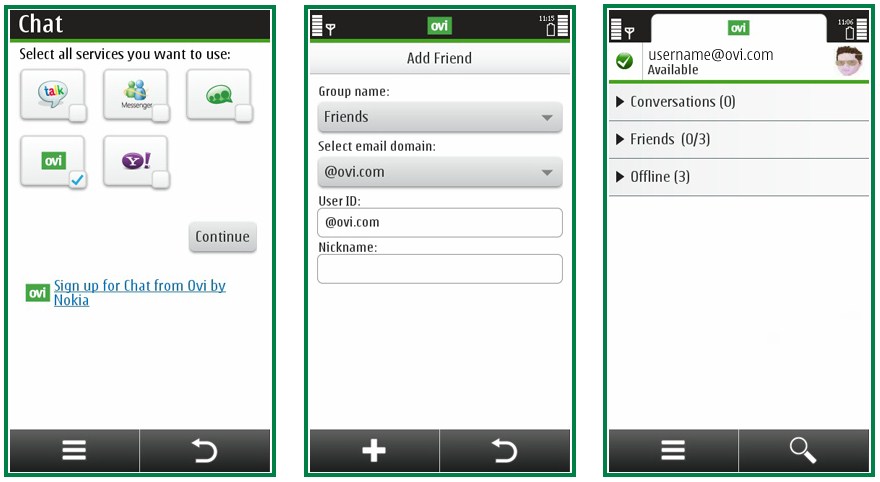