comScore, leader in measuring the digital world, announced the launch of Device Essentials, a service which reports traffic patterns by different types of devices across geographies. The report by Device Essentials provides an insight about the web usage from different devices including computers, mobile phones, tablets, music players, e-readers, gaming devices, and other web-enabled devices.

The Device Essentials provides reports in various dimensions and include the following :

The reports show that iPad and its successor iPad2 account for 89 percent of tablet internet use globally, and 97 percent in the US. iPads have always commanded the tablet market. Though Android tablets are gaining popularity, the traffic share is way behind the iPads'. Below is the data provided. We can see that everywhere iPads' contribution is far more than Androids. 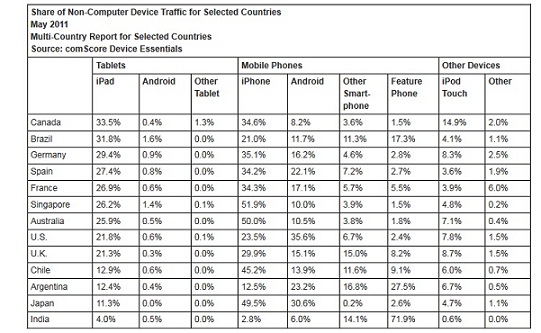 In the smartphone category in US, iPhones lag behind the Android platform in the traffic contribution. iPhone in US contribute to about 36 percent of web traffic while Android phones account for 54 percent. iPhone's share can be seen to be dominating in different parts of world. On an average we can say that they lead Android globally in terms of web traffic share by a significant margin. Interestingly, in other devices category, iPod also sees a major share. 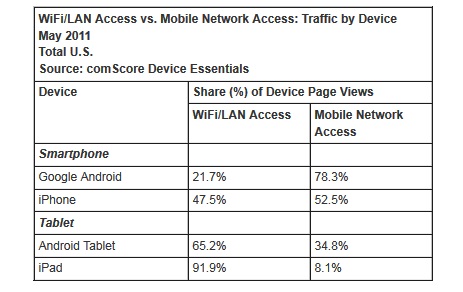 iPad Accounts For 89 Percent Of Global And 97 Percent Of US Tablet Traffic Online was originally published on Digitizor.com on June 24, 2011 - 9:14 pm (Indian Standard Time)