34% Of iPhone Users Think They Already Have 4G

According to a survey conducted by Retrevo, a third of the iPhone 4 owners believe that their phone supports 4G wireless technology.

When asked if they are planinng on buying a 4G phone this year, 34% of the iPhone users replied that their phone is already 4G capable. Also notable is that 24% of Blackberry users also replied that they have are already using a 4G phone. This is despite the fact that neither Apple nor RIM has released any device that supports 4G. 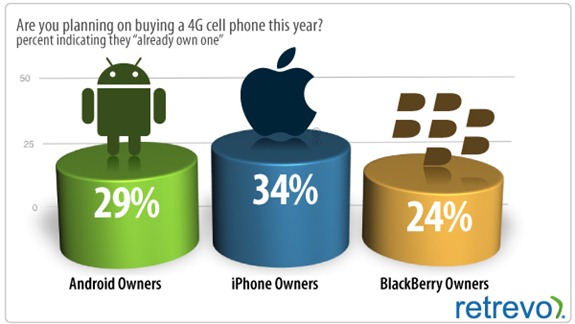 The iPhone 3G had “3G” in the name because it supported 3G. That might have led to the iPhone users believing that the “4” in iPhone 4 means 4G. But for 34% of them to have this mistaken belief just goes on to show how technology ignorant are the common people are.

I have no explanation about why the Blackberry owners might think that they their phone is 4G capable.

In the same question, 29% of Android users also replied that they already own a 4G phone. There are already 4G Android phones out there in the market, but still I think that 29% of them cannot be using 4G already.