KOffice to be available in Nokia’s Maemo 5

In its to-be-released Maemo 5, it has been announced that an office viewer based on KOffice2 is going to be available. This is one of the first steps in Maemo's transition from GTK to QT. For those of you who do not know, Maemo 5 is the OS to be used in Nokia N900. One of the reasons cited for using KOffice has been its light weight.

For the use in Maemo 5, Nokia has created a customised UI on top of the KOffice core which is based on Maemo 5's touch screen interface. For this application, KWord and KPresenter, both parts of the KOffice suit, are used to load and display word and presentation documents. The KOffice documet viewer for Maemo 5 will not be installed by default and has to be installed as a 3rd party app. As of now, the app is going to be just a document viewer not a full fledged document editor.

Now, KOffice has always had problems with correctly rendering MSOffice documents. An interesting part of the announcement says that it is also a part of the project to help KOffice correctly render MSOffice documents. This is really a win-win situation for both KOffice and Nokia - Nokia gets a proper Office application after Abiwords, which quite frankly has never been very impressive, and KOffice gets more users and possibly a proper support for MSOffice Documents. 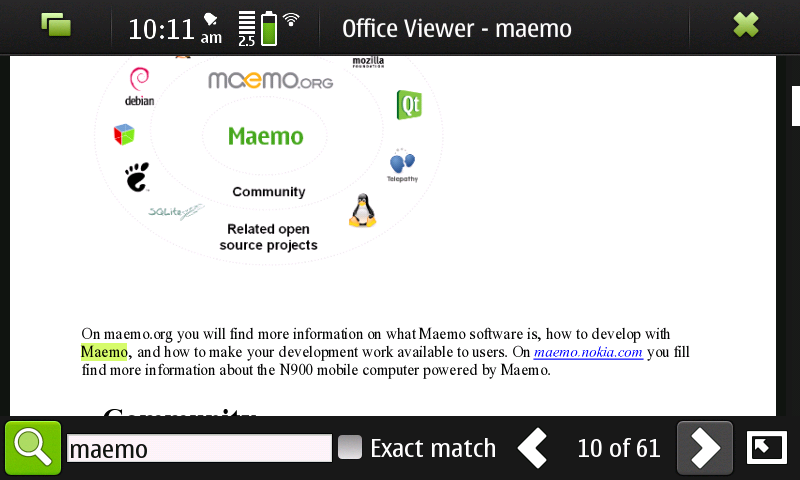 KOffice to be available in Nokia’s Maemo 5 was originally published on Digitizor.com on September 18, 2009 - 8:14 am (Indian Standard Time)