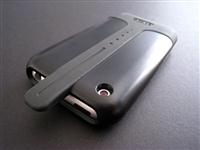 This is not the first time Apple will be using amorphous metal alloys. Apple already uses this technology in its newly released Magic Trackpad. Dr. Peker states that the properties of Liquidmetal make is an excellent substrate for usage as an antenna and could be one of many reasons why it has caught the fancy of Apple.

Not only this, there are plans for using Liquidmetal in complex and seamless casings for the iPhone, iPod or the iPad. And if this happens, the whole outer casing of the next-gen iPhones could be one big metal alloy antenna. The properties of these amorphous metal alloys also allow it to bend without fatigue or crimping so you could theoretically build one-piece hinges or even foldable devices.

Below you can go through a few properties of this so called Liquidmetal:

Again, as expected from Apple, we are definitely going to witness a big innovation in it's  flagship mobile device - the iPhone. What do you feel about this new antenna technology, do let us know in the comments.