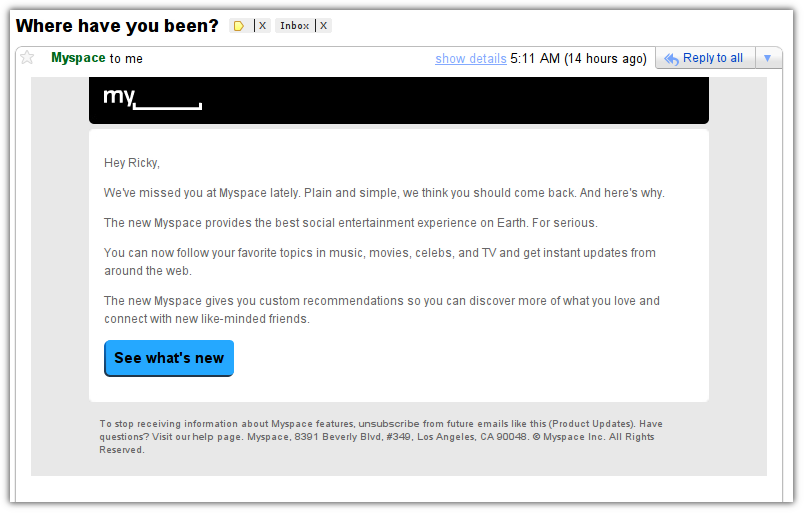 MySpace is a distant memory for many - almost everyone have moved on to Facebook. So, is the case with me. But, today, I received an email from MySpace. In the email, MySpace asked "me" to come back to MySpace because "the new MySpace provides the best social entertainment experience on Earth".

I had no intention of going back to MySpace, but it made me wonder if the new MySpace and its subsequent adoption of Facebook login have yielded any positive result.

Turns out it did nothing to prevent the free-fall MySpace is in. Here is a graph (courtesy of Compete) of the unique visits to MySpace for the last one year.

In the graph above, A represents the month when MySpace decided to reinvent itself into an entertainment portal and B is the month when they allowed Facebook login. Neither of these have done anything to revive MySpace. Maybe the drop in visitors was slightly less in October, when the new MySpace was introduced, but there was still a drop.

The statistics from Alexa is the same too. 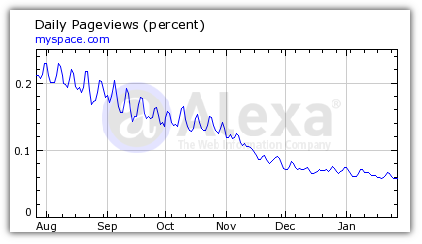 There is no doubt that Facebook has drawn away all the users from MySpace. However, MySpace was perceived to have something that Facebook does not have - the presence of musicians, celebrities etc. Even MySpace believe that this is their strong point and thus the transformation into an entertainment portal. This is what the email they sent says:

You can now follow your favorite topics in music, movies, celebs, and TV and get instant updates from around the web.

Yes Facebook does not have the same level of interaction between celebrities and fans, and I believe neither does MySpace. It has become Twitter's domain now. Most of the popular musicians are moving away from MySpace and it is now Twitter which has become the place to be.

Take for example Lady Gaga. If you compare the her MySpace stream to her Twitter, you will notice that all of her MySpace updates are from Twitter. Or take Britney Spears, her Twitter account is updated way more frequently than her MySpace account. So, isn't it clear where the fans will go to?

The new MySpace is clearly not enough for MySpace. It needs something else. Otherwise it will only get lonelier.

Looks Like MySpace Sure Is Getting Lonely was originally published on Digitizor.com on January 29, 2011 - 9:35 pm (Indian Standard Time)