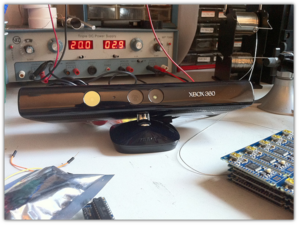 There is no doubt that Microsoft Kinect is an amazing product. Although the Kinect games may be a bit lacking, because of hackers, Kinect is being used for all sot of amazing applications.

Initially though, Microsoft discouraged Kinect hacking. However once they saw what hackers have been able to do with Kicnect, they promptly went back on their earlier stance and said they support the Kinect hacking. In fact, last month there were some rumor that Microsoft is releasing a SDK for Kinect.

Today, they have confirmed just that! Microsoft has announced that they are planning to release Kinect for Windows SDK. According to Microsoft, they will release a non-commercial Kinect SDK for academics and enthusiasts this spring. The commercial release will follow that at a later date.

Instead of relying on hack-ish ways to get Kinect working on their computers, the SDK that Microsoft is releasing will allow users to get access to Kinect's audio, system application programming interfaces and direct control of the Kinect's sensors.

This is what Microsoft's Chief Research and Strategy Officer, Craig Mundie, said:

Microsoft’s investments in natural user interfaces are vital to our long-term vision of creating computers that are intuitive to use and able to do far more for us. The fruits of these research investments are manifesting across many of our products, Kinect for Xbox 360 among them.As breakthrough technologies like these reach scale, the resulting creativity and invention will open up a whole new world of possibilities for computing.

At a time when companies like Sony and Apple are doing everything they can, including going to court, to stop people from hacking hardware they have paid for, this is indeed a very good move from Microsoft. It should win them some browinie points among the users (and hackers) and also open up another market for Kinect.