Well Well, look who has jumped on to the social band wagon. Microsoft is now planning to launch its very own social networking website called SOCL.com. This project is currently called "Tulalip" internally within Microsoft. The company (microsoft) accidentally published a splash page showing "Tulalip" on the domain Socl.com.

Here is a screen shot of the splash screen of "Tulalip": 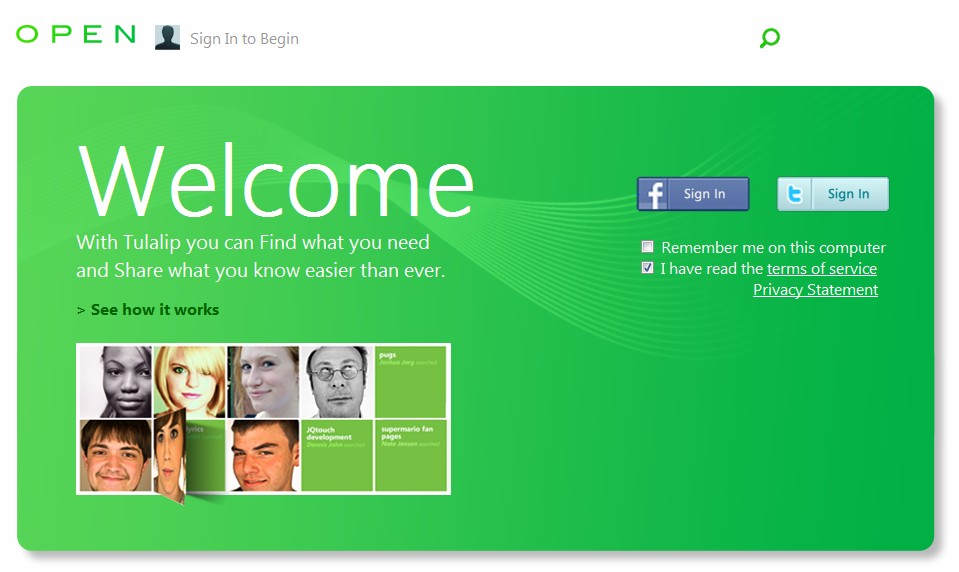 The description on the splash page, as you can see from this image, says with Tulalip you can find what you need and share what you know easier than ever. Below the text there is a face pile of user images just like the Windows Phone 7 tiles.

If you consider the domain name SOCL.com its just a shorthand for SOCIAL, another indication that Tulalip is definitely a social Media based product.

However, Microsoft has taken down the splash page on the website now and replaced it with a text claiming that Tulalip is just an internal design project from Microsoft Research. Here is what currently shows up on SOCL.com:

Thanks for stopping by.

Socl.com is an internal design project from a team in Microsoft Research which was mistakenly published to the web.

We didn’t mean to, honest.

The massive initial success of Google Plus (Google's revamped Social Networking initiative) must have put Microsoft into re-thinking their strategy on social media and plans of starting a new project around a social angle may have followed eventually resulting into "Tulalip".

Nothing is clear so as to why Microsoft chose the name Tulalip for the project. According to Wikipedia, Tulalip is a group of Native American peoples from western Washington state in the United States who are now federally recognized as the Tulalip Tribes of the Tulalip Reservation.

Thanks Tom for the tip

Microsoft Launching Its Own Social Network SOCL.com Codenamed “Tulalip” was originally published on Digitizor.com on July 15, 2011 - 10:57 am (Indian Standard Time)