In a few days, Facebook will roll out yet another new feature that lets you chose who do you want to share your status message with and whom you do not want to show your status messages. In other words, these are similar to the section wise privacy settings that already exist for Photo Galleries and Profile Updates. Not only this you can now chose to share your status updates, links and photo posts with people who are not even on  Facebook. Check the image below. You can see the new privacy options on the Publisher Box (Read: What's on your mind Box). 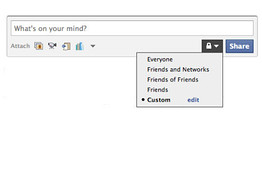 Twitter already has a similar model wherein the status updates are already public by default and you have to chose to protect your updates if you do not want your status updates to be public. After this Publisher Box Privacy feature is activated, even Facebook will have a similar functionality as that of twitter. Where Facebook will beat twitter is the ability of Facebook to allow it's users to share even photos, links and videos publicly! And only time will tell if Facebook emerges as the new Twitter. Photo and News Tip Credits: WSJ Blogs

‘What`s on your mind’ goes public – Now share your facebook status message with anyone you like! was originally published on Digitizor.com on June 27, 2009 - 1:48 am (Indian Standard Time)