Want To Use IE9 Final On Windows 7? Install Service Pack 1 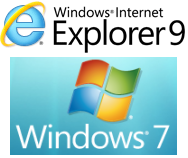 UPDATE: Well, now it seems that you do not need to install the service pack 1 for using the final version of Internet Explorer 9 on Windows 7. Microsoft has even updated the Technet FAQ which says so. (As reported by neoWin)

Microsoft's Internet Explorer 9 (IE 9) has already been in the spotlight since the initial public beta for IE9 was launched. Although, you may have successfully installed the IE 9 Beta on your Windows 7 or Windows Vista system, but you may not be able to use the Final version of IE 9 on your Windows 7 system! Yes, this might sound strange, but the catch here is you have to install the Windows 7 Service Pack 1 before Windows 7 lets you install the final version of IE 9.

On the Microsoft Technet Resources for IT Professionals, there is one question that clearly indicates that users must install the Service Pack 1 for installing IE 9 on Windows 7:

According to Ars Technica,it is quite possible that when users try the final IE9 installer on Windows 7 without installing the service pack 1 it might throw an error message and start the Windows Update for users to get the Windows 7 SP1 themselves.

Want To Use IE9 Final On Windows 7? Install Service Pack 1 was originally published on Digitizor.com on September 24, 2010 - 12:58 am (Indian Standard Time)