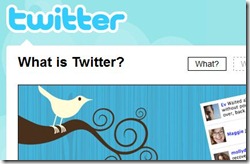 Twitter has become quite popular in very less time as a microblogging platform. What people  fail to understand is that twitter is more of a social media portal come communication tool rather than a blogging tool. Twitter allows any general user to express his/her mind in 140 characters. Twitter has features such as (@ – reply and d – direct message) which allows users to reply to posts (rather tweets) of other users and get notified too. The direct message feature lets users contact each other via tweets anonymously.

Twitter has a user base from all age groups. And unlike social networks, Twitter has a very good number of users in the middle aged group which includes celebrities, think-tanks and big shots of the business world. Many users on twitter fail to understand twitter in the first place. In this article we will tell you some major mistakes which twitter users should avoid and leverage the twitter power to build businesses and use twitter in a better way.

NOT using a Profile Picture

As already said twitter is a social media tool. If you do not have a profile picture, people will hardly follow you and not even bother to connect with you. Not putting up a profile picture gives others a feeling that you do not care to socialize. To add a picture to your profile, go to http://twitter.com/account/picture

Just like a profile picture, not having a bio in your twitter profile will again have not have a very good impact on other users. You should remember all those who use twitter and social media are always curious to know more about you before they connect with you. So, not having a bio in your twitter profile is yet again a big letdown on your part. Go to http://twitter.com/account/settings. Make sure you fill in all info such as your Name, email, one line bio, your location and your website or URL.

NOT using links in your tweets to substantiate your facts

You must remember you are no authority on twitter. Whenever you share some info about something or a fact, you should make sure that you also include a link to support (or substantiate your fact). Since twitter allows only 140 characters, you can use URL shortening services to shorten all the long URLs and then post them.

To reply to a user or his/her comments you should include a @ before your tweet. This way your comments/views will reach the user faster and better. Using @ to communicate with a user makes all your tweets appear on your profile and they become public readable. If you do not want this to be then use a direct message, just use d instead of a @. You should pass on your twitter creditability to other users by using ReTweet. just include a RT before the tweet of your user and post it.

NOT using an elegant design for your profile

You should use a very eye soothing and elegant design for your twitter profile. Using a nice design gives a professional look to your profile and your followers can get an insight of your mettle. Twitter lets you choose from a set of background images and also lets you choose your own. You can also change you font colours: http://twitter.com/account/profile_settings

Twitter is more fun when used through your mobile phone. For a better relationship with your twitter followers, make sure you keep them update always, even when on the move. Go to http://twitter.com/devices in order to set up your phone number. You can also select which user’s updates would you like to get via your mobile phone. This all is done via SMS and you won’t be charged a penny. More help can be found here.

Making your profile a monologue

You should remember twitter is a communication tool and you need to let others know about your views to the information that they have posted. For eg. to reply to a user’s view, you should include @<user-to-reply> <Your-Comment> and you can validate another user’s tweet by using a RT <User’s-Tweet>

You should also refer to the Twitter Guide. We would like to thank Chris his valuable for inputs to this article. Please let us know how you feel about this article. You can leave a comment or send a mail  us directly - mailman [at] digitizor [dot] com

9 mistakes that users should avoid on Twitter was originally published on Digitizor.com on June 29, 2009 - 3:31 am (Indian Standard Time)