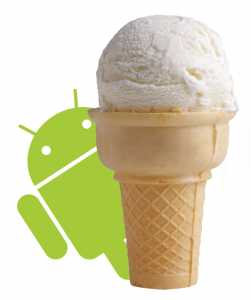 Android 4.0 is for real now. And the best part is it will be code-named "ice-cream". This was apparently confirmed by ARM President Tudor Brown (that Android 4.0 would be called Ice Cream). There seem to be very little chances that he would be mistaken, as ARM's processors are being used in over 95 of all mobile phones out there. (source)

Android 3.0 has been codenamed Gingerbread and the codename for Android 3.5 is Honeycomb. So going by this code-name convention of naming releases after desserts, the codename "Ice-Cream" for Android 4.0 does not seem to be too vague. Android 4.0 is expected to be released sometime mid or second half of the next year.

I personally love the name Ice Cream. What about you?