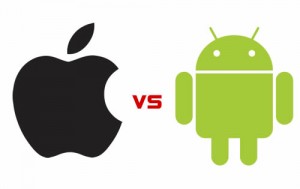 If one looks at the smartphone world of today, only two platforms are dominant - Android and iOS. These two platforms have overshadowed every other platforms in the world of smartphones. There are already a huge number of Apps available for both of these platforms - and the number is still increasing. In this article, we take a look on how apps for these two platforms differ on the basis of their development.

If you want to develop apps for iOS and get them listed on the App Store, it will cost you $99 per year plus some strict rules and regulations Apple has put in place. When it comes to develop apps for the Android phones, it is cheaper and the rules are easier. Google takes $25 flat fee to put your apps on the Market, plus $20 if you want to charge for them. Because Android is largely an open platform, there are also other app stores other than the official Google Market such as the Amazon App Store.

When it comes to making money, the iOS platform has so far proved to be better than Android. Every app you write will undergo a screening process from Apple before they are placed in its store. Most of the Android developers are only making a tiny fraction of the money that's being made on the iTunes App Store. However, some Android developers are making a lot of money on Android too.

For writing apps for iOS, Objective-C is used. Objective C is a very dynamic and loosely typed language that is also used for writing Mac apps. On the other hand, Android developers have a bit more freedom in the choice of language. Java, which is widely used for different many purposes, is mainly used for writing Android apps. However, if Java is not your cup of tea, you can also use C or C++ to build your apps using the NDK.

Android offers an easier application development experience. Writing apps for iOS is far more painful and laborious than writing for Android. Supporting HTML, JavaScript, and SQL makes things easier. Since it's easier to start writing Android apps and the entry barrier is lower, there are a lot more "amateur" apps on the Android Market.

Why is Apple sticking with Obj-C when Java can do things very easily? One thing that I can guess is depth of knowledge. The persons who have a deep knowledge of Obj-C can only write well designed apps and Apple doesn't want to support tricky Java and its users. By favoring Objective-C instead of Java or Flash, Apple is attracting the best and brightest brains.

When you write for iOS, you know what screen size is available to you. With the known screen dimensions of iPhones and iPads, developers can treat the screen as a canvas, and know what their apps will look like for everybody who uses them.

But when it comes to Android, developers cannot be sure which devices would be using the apps. The screen resolution and dimension of Android phones vary very widely. Accounting for every phone on which the app will be running is a serious pain for developers. This also makes many of the users angry when they come to know that one app which is supporting other phones, is not supporting theirs.

A thing of beauty is joy forever. And that goes with iOS apps. No doubt, Android apps are also quite impressive but iOS apps seem more beautiful and utilitarian, that's why they win love and affection of masses.

But I see Android as the future, overpowering Apple's iOS. Android is growing leaps and bounds against the restricted growth of iOS. In no time Android will be ruling the world with everything on the user's fingertips.

Apples are not for me and Green is the color for me!