The applications ecosystem in smart-phones like the iPhone have already created a number of "Millionaire" success stories. In fact there are several iOS developers who went on to build successful companies just by developing awesome applications for the iPhone or the iPad. However, the story has not been the same for developers on the Android platform.

Apple's paid applications and in-app purchases have been one of the reasons which has attracted more and more developers to the iOS platform and Android being an open ecosystem, the only way developers could monetise their apps initially was in-app advertisements. Research firm Distimo conducted a study on the current state of the Android market and has some interesting revelations. 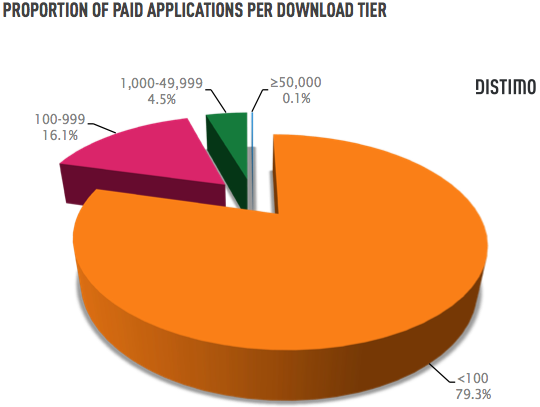 Android Market: No. Of Downloads vs. % of Apps

Coming to the Android apps which are heavily downloaded, there are only 96 such applications which have been downloaded more than 5 million times. Now, 96 is a very less number for a platform which is seeing 400,000 new device activations daily! In order to get a better idea lets compare some stats with the Apple App Store. The Android Market has 10 Games which have seen 250,000 plus downloads worldwide whereas the Apple App Store has 5 games which have been downloaded more than 250,000 times in US alone!

All these numbers definitely prove that Google needs to do more in order to get more Android users to download and try out new apps from the Android Market, if they want to get even close to the Apple App Store in terms of Downloads. Apart from this more and more developers should be attracted towards the Android platform. Another reason is Apple's strict screening policy which makes sure that only the best apps make it to the App store, whereas such a policy is absent in the Android Market and as a result malwares are common on the Android platform.