Android is growing at a real fast pace. Given the fact that, more and more manufacturers are taking to Android as the de-facto operating system for their smart phones, this growth is only going to get bigger. At this year's Google I/O conference (which is happening currently) people from Google shared some very good looking stats about Android's growth.

The first one was about number of Android activations daily. The figure stands at a whopping 400,000! Yes, more than 400,000 Android devices are now getting activated each day. Just a couple of months back, Eric Schmidt had told at the Mobile World Congress that 350,000 Android devices were getting activated then. This really amazing growth indeed. 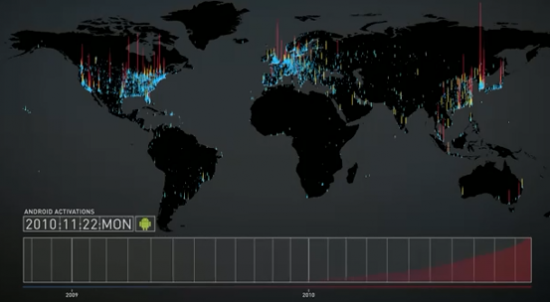 Visualising the world-wide growth of Android

The next one is about the Android Market growth. The Android App Market now has more than 200,000 applications for both the mobile and tablet platforms (Honeycomb). The app market has also seen tremendous growth in the number of app. installs. As of now the Android Market has delivered 4.5 Billion app installs of which 2 Billion installs happened just during the last five months. This shows how fast is Android making it's presence in the mobile market.

Malware has always been a problem on the Android platform due to the absence of strict monitoring policies for Applications in the market. This is where Apple's App Store wins hands down. Some days ago we told you how Google deleted 21 malware apps from the Android Market. The increase in malware in the Android Market has been alarmingly high - 400% and SMS Trojans contribute to 17 percent of all the infections.