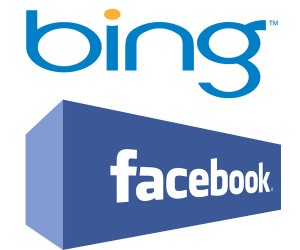 Last year, in October, Facebook and Microsoft announced they were working together to personalizing Internet searches. Then in February this year the two companies expanded the service to include more URLs. Now the things get more interrelated as,with effect from Monday, Bing's search results vary depending on whether the person making a request is logged into Facebook's online social network at the same time letting Bing search results reflect the "likes" of people's friends at Facebook.

Things that have been liked by one's friends or family will be prioritized more than before and consequently pushed up higher in search results.Some of the major features will include -

Bing also is adding several other features and tools that deepen its ties to Facebook. Among other things, online shoppers using Microsoft's search engine will be able to post links about products and services directly to their Facebook accounts to get the opinions from their friends and family.

The best decisions are not just fueled by facts, they require the opinions and emotions of your friends.Bing is bringing the collective IQ of the Web together with the opinions of the people you trust most, to bring the 'Friend Effect' to search.

Bing , being a small entity can take some risks and go for more experimentations. The new joint move is an indicative of a direct rivalry of both the giants with Google's. Both Microsoft and Facebook are trying to lure some traffic away from Google . While the relationship between both deepens, gap between Facebook and Google is widening. Let's wait and see if the new features will be truly increase Bing's share of search on Internet.

Bing And Facebook : Relationship Deepens was originally published on Digitizor.com on May 17, 2011 - 4:37 pm (Indian Standard Time)