The Browsers and The Test

So here is the list of the browsers we are going to be testing:

We are going to put these browsers through the SunSpider JavaScript Benchmark and the V8 Benchmark Suite.

Without further ado, here is the result of the SunSpider JavaScript Benchmark for the different sections:

Remember that in this test lower score is better. 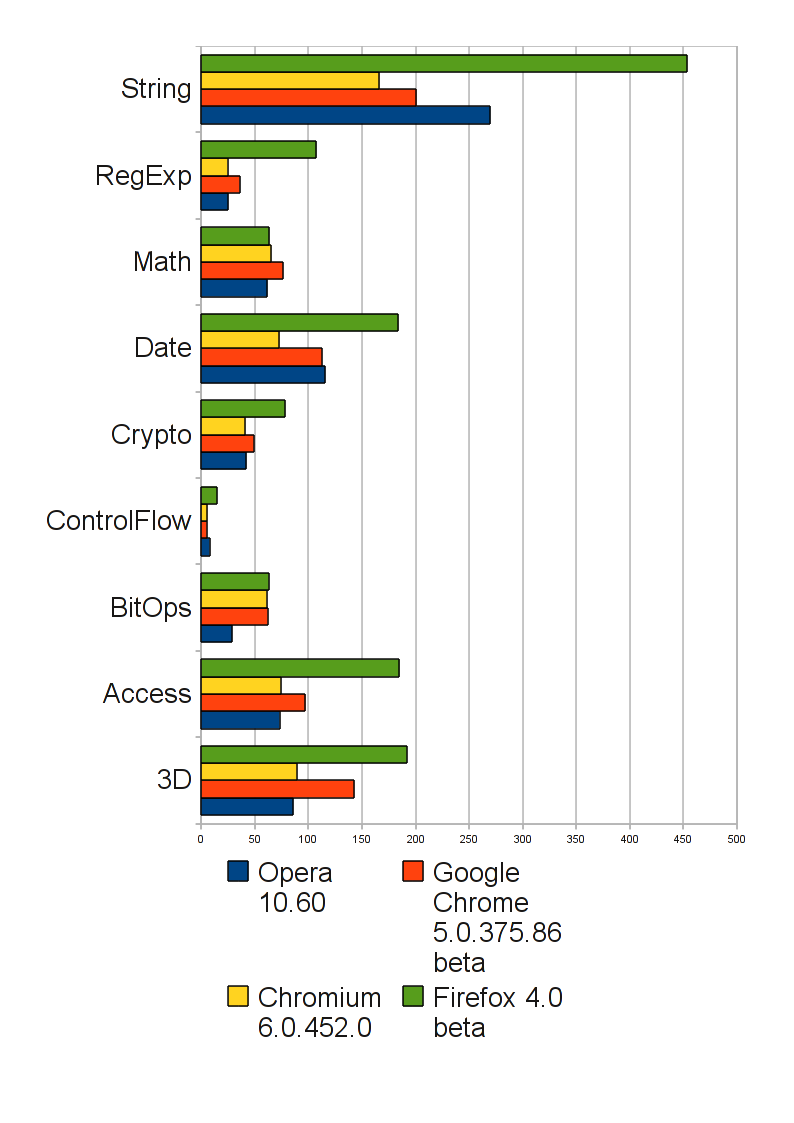 Ok obviously, Firefox 4.0 beta is out of its league here. Except for one test it is the slowest in every test. But after our review of Firefox 4.0 Beta earlier, we expected this and this is nothing surprising.

Now the real competition is between Opera, Chrome and Chromium. However, Chromium is consistently getting good scores while Opera and Chrome does not do well in some tests.

Anyway, here is the final score found out by adding all the scores of the various test. Remember lower scores means faster. 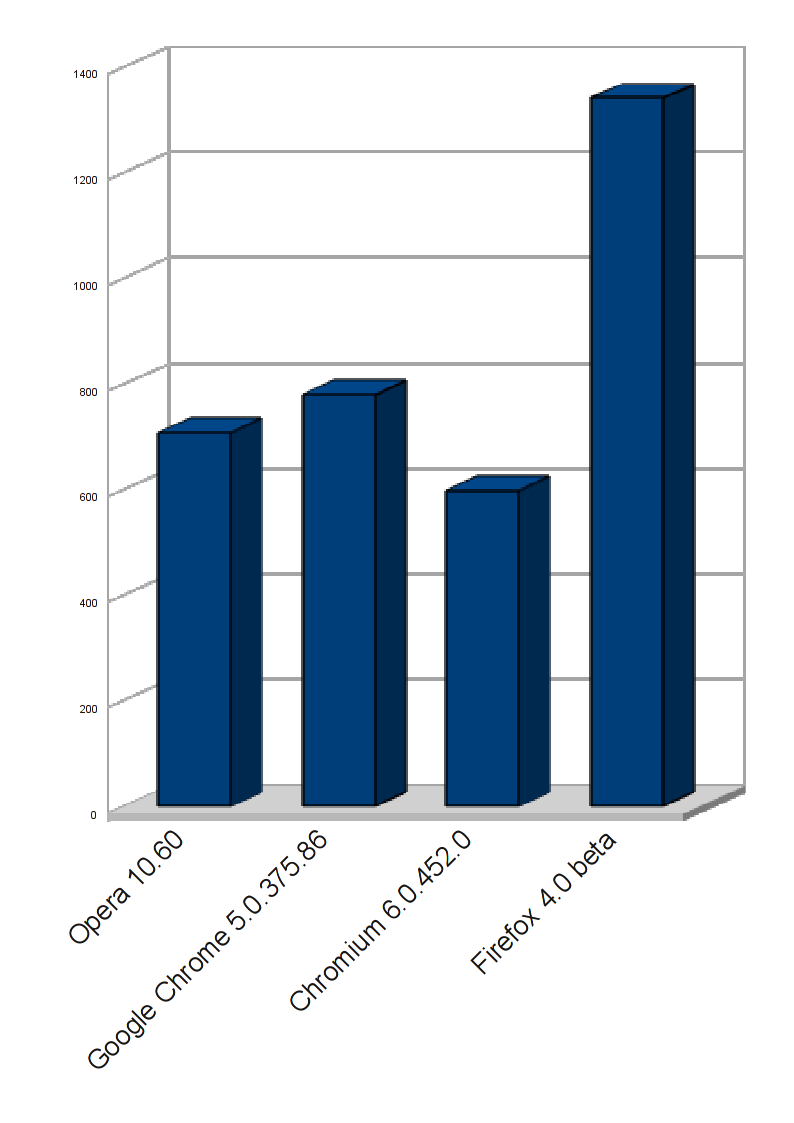 From the final score, we can clearly see that Opera is faster than Google Chrome. But the fastest browser in this test is the dev version of Chromium, and by quite a margin. As expected, Firefox did not do very well.

In this test, higher scores are better unlike in the previous one. A browser which has higher score is faster than one with lower score.

Here is the result: 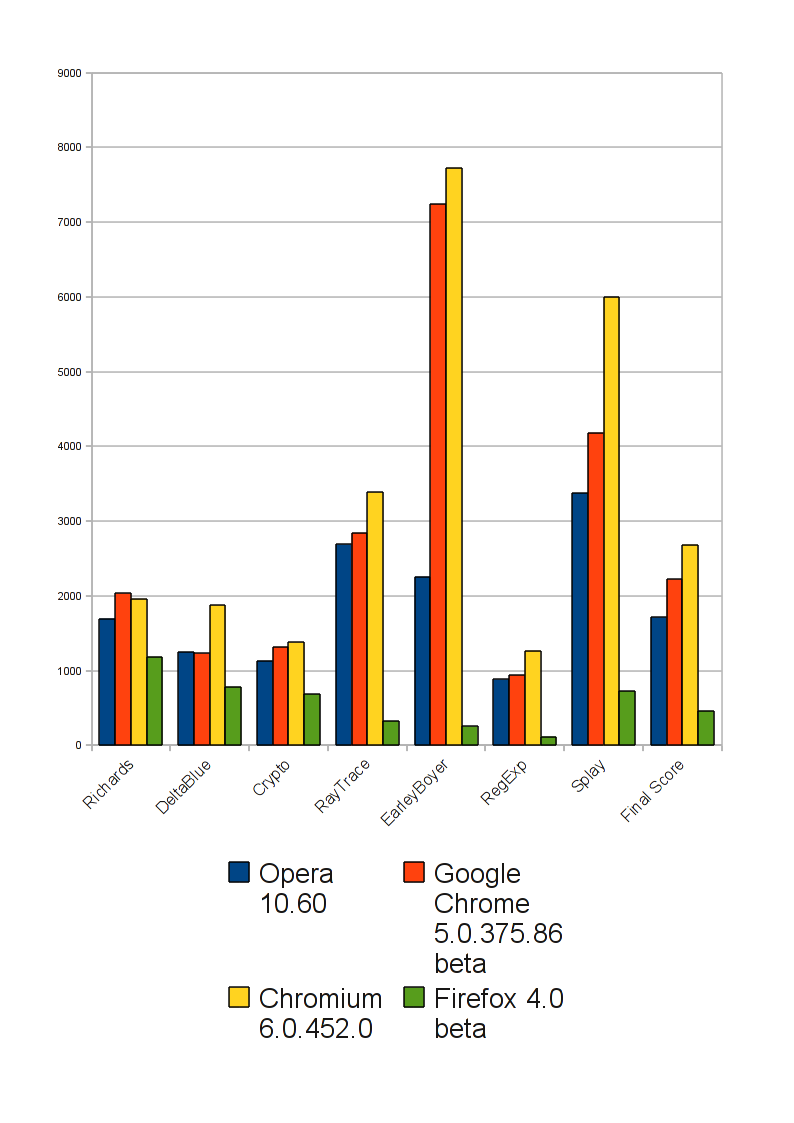 As you can clearly see, Chromium blows away he entire competition here. Except for one test, in which it came second, it has managed to score the maximum points in every test. Another thing is that Google Chrome just scores more than Opera in just about every test. As expected, Firefox was never a competition.

If we look at the final score (last one from left), Chromium has clearly is clearly the fastest browser by some margin. It is also interesting to note that Chrome managed to outperform Opera by quite a margin here.

In both of the tests, Chromium has managed to outperform the competition by quite a margin. So, Chromium 6.0.452.0 is the fastest of the browsers we have tested. However it is a tough decision between Opera 10.60 and Google Chrome 5.0.375.86. Opera is faster in the SunSpider test and Chrome is better in the V8 test. So, we will leave it at that. We call it a draw  between the two.

So, is Opera 10.60 the fastest browser on earth? The answer is "No". Opera 10.60 has improved a lot but Chromium is a hell of a lot faster than it. Some may argue that I was using a dev version of Chromium. Well not everyone would use the dev version but it is still a browser, and a very fast one at that.