In the Ubuntu Developer Summit which starts today, Mark Shuttleworth surprised a lot of people by announcing that Ubuntu 11.04 will have Unity as the default desktop interface.

Unity is a new user interface developed by Canonical. The main aim of unity is to maximize the availability of vertical space by sacrificing some horizontal space. Here is a screenshot: 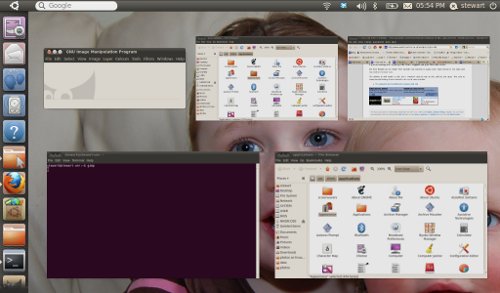 Unity made it debut in Ubuntu Netbook Edition 10.10. It was designed from a netbook perspective and supports multi-touch.

Why Not GNOME Shell?

GNOME is also developing something like Unity called the GNOME Shell. So why doesn't Canonical want to use it.

The main problem is the difference between Canonical and the GNOME Shell developers over what a desktop interface should be like.

This is what Mark Shuttleworth said:

We were part of the GNOME shell design discussion, we put forward our views and they were not embraced by designers. We took a divergent view from the GNOME shell folks on key design issues, for example how application menus should appear on the system, how one should search to find applications, how one's favorite applications should be presented.

There are also a lot of other differences. One is regarding the windows manager. GNOME 3 is going to use Mutter as the windows manager not Compiz. According to the Ubuntu developers, Mutter cannot give the desired performance. For example, Unity currently uses Mutter (it will be replaced by Compiz) and is heavily criticized for its performance.

So, is Canonical splitting from GNOME?

Ubuntu will still remain a GNOME distribution. It will still have the GNOME stack and the applications. The only thing missing will be GNOME Shell. Of course, the Ubuntu desktop will look and behave completely different from the default GNOME one. But it will still be GNOME. So, no Canonical is not splitting from GNOME yet.

Canonical Chooses Unity Over GNOME Shell For Ubuntu 11.04 was originally published on Digitizor.com on October 26, 2010 - 12:11 am (Indian Standard Time)