Empathy, the default IM client in GNOME, is getting a brand new feature - meta-contacts.

If you have used more than one one IM service, you would have no doubt seen that the same person is listed as many times as the number of services he is using. For example, if, say Bob uses both Gtalk and MSN, Bob is listed twice in Empathy - one for the MSN account and the other for Gtalk. The same thing happens when someone has more than one accounts with the same service, maybe one for personal use and another for work. Or, it could be you who have multiple accounts.

In Empathy, they have tackled this problem by introducing meta-contacts. With meta-contacts, under a single meta-contact name a number of different contacts can be grouped. So, now instead of having Bob (MSN) and Bob (Gtalk), there is a single entry Bob and the MSN and Gtalk accounts are grouped under it. This will create a much cleaner interface and probably avoid confusions.

This is how it is implemented in Empathy now: 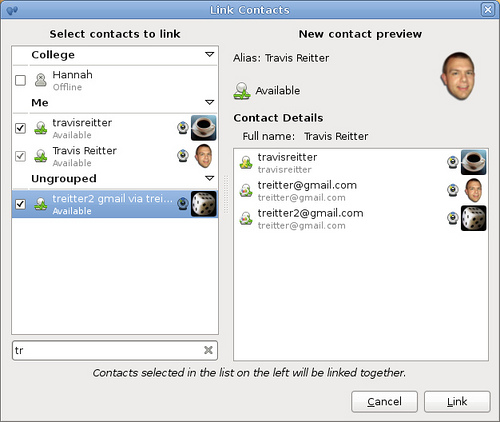 Right now only contacts having the same service ID are grouped together automatically. Most of the linking have to be done manually. But hey its is a good start!

This feature is currently available in Empathy 2.31.91. Only the source code is available right now. However, it should come to Debian experimental soon and probably to the Ubuntu repository too.

For now you have to build it from source if you want to use it. Download the source from here.

Empathy Gets Meta-Contacts was originally published on Digitizor.com on August 31, 2010 - 10:53 am (Indian Standard Time)