Today we got yet another beta for Firefox 4 - or more specifically Firefox 4 Beta 11. This is an important release for privacy and for Linux.

Do Not Track Me!

The Do Not Track feature was first proposed last year by the U.S. Federal Trade Commission. According to this feature, the browser will include a field in the HTTP header which says that the user does not wish to be tracked by advertising networks etc. Currently some advertising networks allows you to opt-out of their tracking and for those which does not allow it, there are browser add-ons, extensions to prevent tracking.

This feature landed today in Firefox 4 Beta 11. However - and that is a big however - it will not work unless the advertisers agree to adopt this.

If you are running Firefox 4 Beta 11, you can enable it from Options > Advanced > General. Then enable the check-box next to "Tell websites I do not want to be tracked". 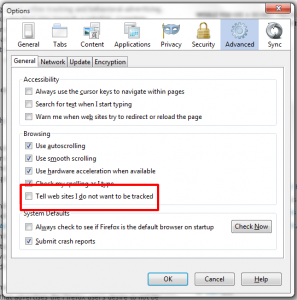 Recently Firefox disabled WebGL in Linux citing buggy X drivers as a huge problem. This was what Firefox developer, Boris Zbarsky, said back then:

We tried enabling OpenGL on Linux, and discovered that most Linux drivers are so disastrously buggy (think “crash the X server at the drop of a hat, and paint incorrectly the rest of the time” buggy) that we had to disable it for now. Heck, we’re even disabling WebGL for most Linux drivers, last I checked…

With this update though, it seems like the Firefox developers have fixed some of the issue and they have enabled enabled WebGL. There is still no words about hardware acceleration though.

If you are not using Firefox or using a stable version, you can download and install Firefox 4 Beta 11 from here. It is available for Linux, Mac OS X and Windows. Just remember that this is a beta and you could run into bugs.

If you are already running an earlier beta of Firefox 4, you can simply update it. To do it, go to the Help menu and then About Firefox. It will automatically look for the update.

Read more about this release here.

Firefox 4 Beta 11 Adds “Do Not Track” Feature And Enables WebGL In Linux was originally published on Digitizor.com on February 11, 2011 - 12:13 am (Indian Standard Time)