Google translate for iPhone has got a major overhaul. Earlier, it was available only as a web app, but yesterday Google has released a native app for iPhone. The new app has all the features of the earlier web app and a few more. However it is not nearly as feature rich as the Android app.

One of the major new feature in this app is the addition of speech input. Now iPhone users can just click on the press the microphone icon and speak what they want translated. Unlike the normal text based translation though, this feature is only available in 15 languages. 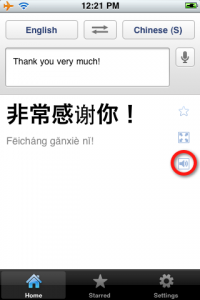 Another new feature in this app compared to the web app is the text-to-speech feature. After you have translated something, you can now make the app speak it back to you - like in the desktop version. Thisfeature is available in 23 languages.

This is the only feature in the iPhone app which the Android app does does not have. What it does is basically displays the translated text to full screen size. It could be useful if you want to show the translation to someone that you are communicating with.

All in all, this is a huge step forward for Google Translate on iPhone. Other than the new features mentioned above, another huge improvement is the fact that this is a native iPhone app now. This means users can access the app more quickly instead of opening the browser and typing translate.google.com.

The app is available for iPhone and iPod Touch with iOS version 3 and above from the App Store.