Firefox 5 Benchmarked – Faster And Better Than Ever Before!

The SunSpider JavaScript Benchmark is a test for the JavaScript engine of the browser. In this benchmark, lower scores (time) means better performance. In our earlier benchmarks, Firefox is always slower than other browsers such as Chrome and Opera. Let us see how well Firefox 5 does. 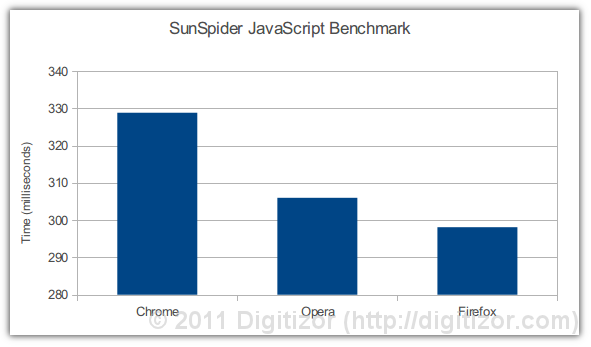 As you can see from the graph above, Firefox 5 has made huge improvements in its JavaScript engine. It is now much faster than both Chrome and Opera. However, the difference is very small - just 30ms faster than Chrome and 8ms faster than Opera. So, finally Firefox can no longer be considered a slow browser.

Peacekeeper is yet another highly regarded test for the JavaScript engine. Unlike the SunSpider test, Peacekeeper tests the normal JavaScript applications such as animations, navigation, forms etc. In this test, higher scores means better performance. Here is the result: 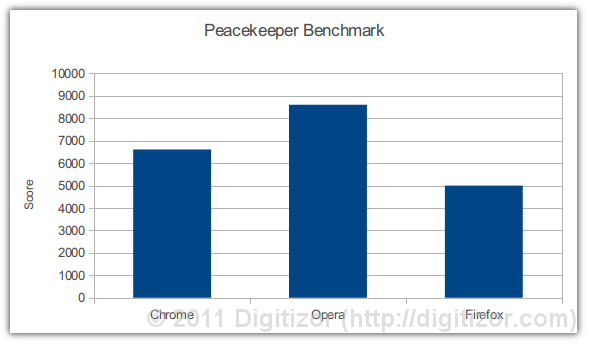 The result from the Peacekeeper test is very different from that of the SunSpider test. Here, Opera got the highest score while Firefox 5, which did best in SunSpider, performed the worst of the three browsers. 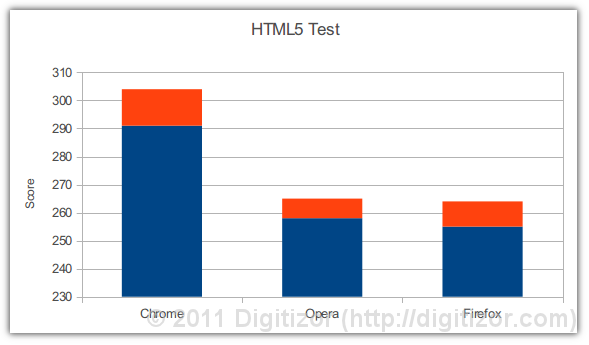 In this test, Chrome takes the lead by scoring more than 300 points. Opera and Firefox are neck to neck with Firefox scoring 254 and Opera scoring 255. The performance of Firefox 5, is a huge improvement from that of Firefox 4 which manages a score of just above 200. 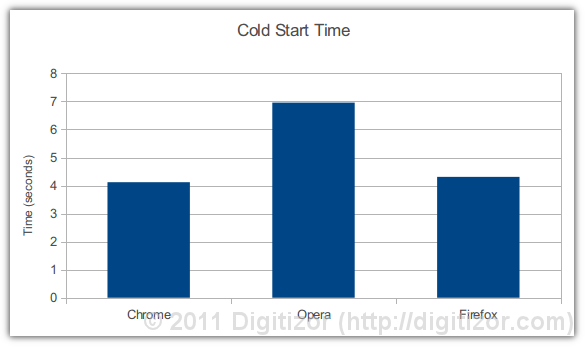 Opera takes the longest time to start here at around seven seconds. The other two browsers have almost the same cold start time at a little above four seconds.

A test for warm start was not done because all of the three browsers have a warm start time of less than a second and it was impossible to time it properly.

The different browsers takes up varying amount of RAM. To test how much each of them is taking up, we loaded 25 popular websites and check the memory consumption of the browser after opening every five websites. Extensions, add-ons etc. which are not installed by default are removed. Here is the result: 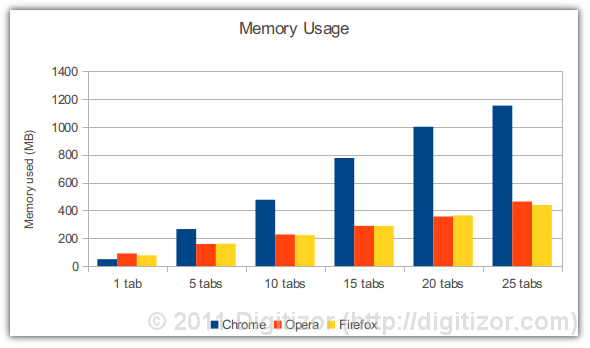 As you can see, Firefox 5 does very well in four out of the five tests. Here are some of the main points about Firefox 5 from the tests:

Firefox 5 Benchmarked – Faster And Better Than Ever Before! was originally published on Digitizor.com on June 21, 2011 - 1:15 am (Indian Standard Time)