Microsoft has put in a lot of work to make the new SkyDrive "faster, easier to navigate and look more beautiful to look at photos". Microsoft claims SkyDrive is much faster now and actions such as navigating into a folder now takes 100-300 milliseconds instead of 6-9 seconds which it usually takes. I am not sure about the exact time but it does feel fast. 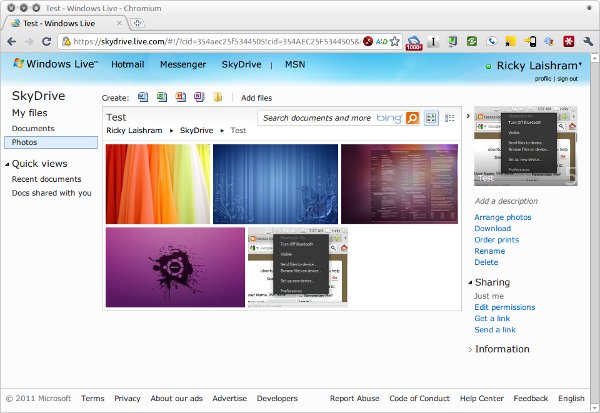 The album viewer now makes use of hardware acceleration to provide a faster and more fluid animation. The album viewer also supports video playback now. The video playback too uses HTML5 which ensures that almost everyone can watch it. A cool feature of the new album is that the photos are arranged to fit on the screen beautifully preserving the aspect ration no mater what the size of the browser is.

Huge improvements have also been made in the navigation as well. The new SkyDrive navigation system is modeled after Windows and documents such as word documents, spreadsheets etc. now opens online in Office Web App. With Internet Explorer 9, users can use pinned site feature on SkyDrive to get quick access to SkyDrive using the Jump List.

The most important change in this new version of SkyDrive is, however, HTML5. With rivals Google and Apple betting big on the cloud, the new SkyDrive, built using web standards instead of the proprietary Silverlight, is Microsoft's answer. And the result is immediately visible. Right now I am using SkyDrive on Linux and it works perfectly - something which I had never been able to do when SkyDrive was a Silverlight application. By embracing the open web technologies, Microsoft is opening up SkyDrive to everyone who uses a modern browser.

By opening up SkyDrive to everyone regardless of platform and modeling the navigation after Windows, Microsoft is pushing for SkyDrive to become a central point for users to access their data, not just an online backup service. SkyDrive will also play a big part in the future versions of Windows Phone. Microsoft wants to use SkyDrive as a means for information to flow seamlessly across devices - both Windows and Windows Phones. We also expect SkyDrive to play a very big role and be integrated deep into the operating system when Windows 8 is released.

Here is a video of SkyDrive that Microsoft has released:

Click here if you cannot see the embedded video.

Microsoft Reinvents SkyDrive With HTML5 Technologies – No More Silverlight was originally published on Digitizor.com on June 21, 2011 - 6:25 am (Indian Standard Time)