With Google's Chrome OS being entirely based on web apps, offline web apps are a necessity as there might be cases where internet connection is not available. So, Google has been working on building offline versions of its web apps such as Gmail, Docs etc. using HTML5 technologies. Today, Google has released the offline version of Gmail as a Chrome app.

The new app - called the Offline Google Mail - is based on the Gmail web apps for tablets. It uses HTML5 technologies to store your emails locally. This ensures that you can read emails, organize them or respond to them even when there is no internet connection available. Of course, emails you send when in offline mode will be actually sent when internet connection is available. 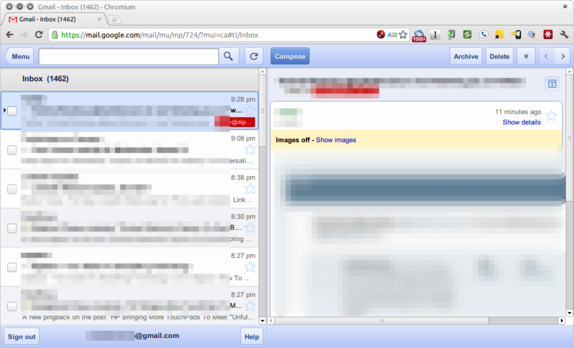 As mentioned before, this is available only on Google Chrome (or Chromium). It is not yet available for other browsers like Firefox, IE etc.

To start using Offline Google Mail, you have to install the app from the Chrome Web Store. Click on the link below.

Once you have installed the app, open a new tab and you will find it under Apps. The next time you are without an internet connection, you cab launch this app to access your emails. When internet connection is available, the app will sync with Gmail even if it is not opened in a tab.