Less than a day into the public release of Google+ for Web, Google has already taken the steps to take it to the next level, by introducing an Android app in the market! And so far, the response has been over whelming. If you thought the web interface was brilliant, you are going to love the app's sophisticated yet uncluttered UI. Although it looks a lot similar to that of its arch rival (Facebook For Android), it is much more functional.

Google+ for mobile makes sharing the right things with the right people a lot simpler. The Stream is where you get to view the updates from your Circles and also lets you post content and share your location. The Huddle lets you keep in touch with the people of your choice - a feature that lets you start off a private/group chat with the click of a button . The Notification bar is neatly tucked away below, and can be accessed with ease. And the optional Instant Upload feature automatically uploads the photos and videos you take with your device into a private album in the cloud, which can be shared later on with selected Circles.

The App was released just 2 days ago, and it has already been installed over a hundred thousand times, and has received over 3500 ratings, showcasing the impact Google+ has had on the Web! The app is still in the developmental stages. It will be interesting to see how Facebook responds to this, with Mark Zuckerberg promising the launch of an "awesome" feature the next week [Source : Reuters]

Until then, check out this app, and let us know what you think of it : Download Link 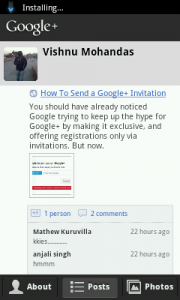 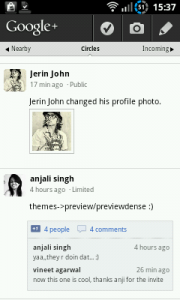 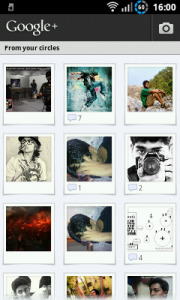