A staggering 7 million people signed the online anti-SOPA petition initiated by Google in just 24 hours, confirmed a Google spokeswoman. The petition was available to sign on Wednesday, linked from Google homepage, meant to increase awareness about the SOPA and PIPA acts currently under consideration by the U.S Congress. The Google petition came in consonance with the Wikipedia blackout on January 18. 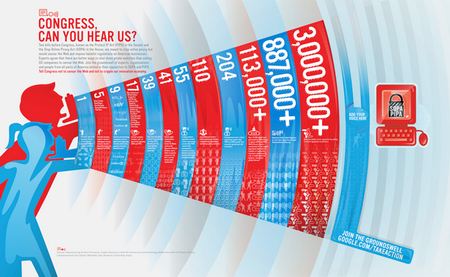 "Members of Congress are trying to do the right thing by going after pirates and counterfeiters but SOPA and PIPA are the wrong way to do it," the petition website says.

The Google logo blacked out on Wednesday, a first for the search engine website which is famous for changing its logo for popular events and holidays. A link below the search field read – “"Tell Congress: Please don't censor the web!". The petition website created by Google encouraged readers to support the movement by adding their names to an expanding list of advocates against the two controversial bills. The website has the slogan “End Piracy, Not Liberty” and according to Google spokesperson Christine Chen, the last number the company released at precisely 4:30 pm ET, was 4.5 million and counting.

The public support garnered by Google, Wikipedia and other websites through the use of the web in intelligent ways has resulted in politicians taking note. In the U.S, both Republicans and Democrats announced that they will either vote against the bills or move for amending them to make them more compatible with the idea of a free Internet space, devoid of piracy and copyright theft.