Google Hopes To Make The Web Go Faster With “WebP”

After introducing the open-source video coded VP8 and the container WebM a couple of months back, Google is back again to redefine the web standards. This time they have introduced a new image format called WebP (pronounced as “weppy”).

Currently the dominant image formats used in the internet are GIF, JPEG and PNG. All of these were developed more than a decade ago. So right now, images are proving to be a major cause of latency on web pages everywhere.

Google hopes to solve this with their new image format – WebP. WebP is a lossy compression method where users can adjust the degree of compression to choose the trade-off between image quality and file size. WebP uses predictive coding to encode the image. Incidentally this is also the same encoding technique used in VP8.

According to Google WebP images are at an average around 40% smaller than the other formats (JPEG, GIF and PNG) with similar image quality. Considering that fact that around 65% of the data transmitted through the internet today are images, this is bound to make a very serious impact. 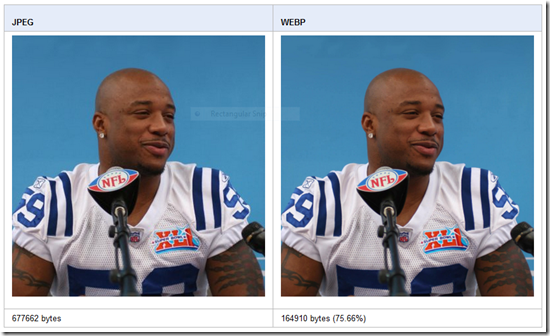 Google has also put up a gallery comparing JPEG images with WebP, with the difference in file size. Since web browsers do not support WebP yet, they have used PNG container in the gallery. WebP will use a contained based on RIFF.

You can read more about WebP here.

Google Hopes To Make The Web Go Faster With “WebP” was originally published on Digitizor.com on October 2, 2010 - 12:43 am (Indian Standard Time)