At the Inside Search event being held at San Francisco, Google has announced a new addition to its search features - Search by Image. The Search by Image feature is something like Google’s image search application for mobile devices – Google Goggles.

Those who have used service like TinEye will be familiar with what Search by Image does. Although technically similar to what TinEye does, Google has taken it much further.

Update: Google has also launched Voice Search for the desktop. 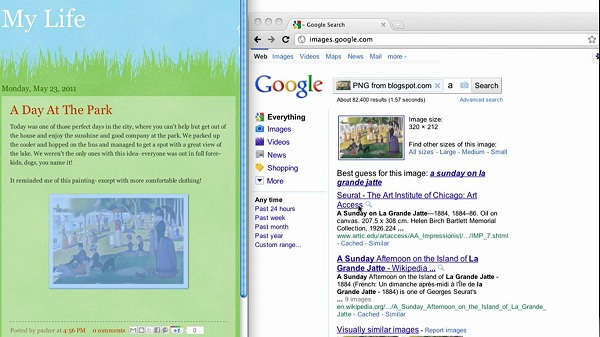 Suppose you have an image you want to search about. There are three ways for you to use Search by Image to search for the image:

After the image has been analyzed by the servers at Google, Google will attempt to identify the image and bring up search results related to it. The technology used for Search by Image is similar to that used by Google Goggles for smartphones.

The service is not live yet and Google will roll out the feature in the coming few days. You will know that Search by Image has been activated for you when you see a camera icon at the right of the search box.

Here is a video that Google has released introducing Search by Image:

(Click here if you cannot see the embedded video.)

Google Launches Search By Image – It’s Like Goggles For The Desktop was originally published on Digitizor.com on June 15, 2011 - 12:12 am (Indian Standard Time)