Google Slaps Back At Facebook: Asks Users To Register A Complaint

A kind of war has been going on recently between Facebook and Google over a contacts export issue. First, Google blocked Facebook access to the GMail contacts API. To this, Facebook responded back with a new method to get GMail contacts of an user (the download contacts option). And now Google has slapped back again at Facebook. 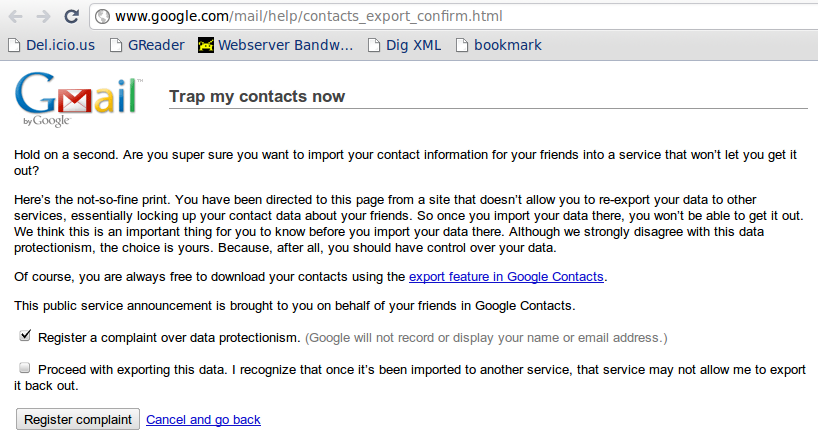 The web page shown above is available at: http://www.google.com/mail/help/contacts_export_confirm.html

And here is what Google has to explain to it's users regarding downloading their contacts and handing it over to someone else:

Hold on a second. Are you super sure you want to import your contact information for your friends into a service that won’t let you get it out?

Here’s the not-so-fine print. You have been directed to this page from a site that doesn’t allow you to re-export your data to other services, essentially locking up your contact data about your friends. So once you import your data there, you won’t be able to get it out. We think this is an important thing for you to know before you import your data there. Although we strongly disagree with this data protectionism, the choice is yours. Because, after all, you should have control over your data.

Google then asks the user to file a complaint against this (which is indirectly directed towards Facebook) data protectionism and then lets the user to download his/her contacts. Now the thing is people love Facebook and most of the Gmail and Facebook users will not care about what Google has to say. So we feel very less people will actually end up selecting the Register a complaint checkbox, as you never complain against someone whom you love 🙂

Google To Facebook: You Can’t Import Our User Data Without Reciprocity

Google Slaps Back At Facebook: Asks Users To Register A Complaint was originally published on Digitizor.com on November 10, 2010 - 8:25 pm (Indian Standard Time)