Google To Launch Social Games – In Association With Zynga

Looks like Google has finally done something to cool off the heat it was already receiving from Facebook on the social web front. Google has secretly invested in Social Gaming major - Zynga in order to power Google's own social games. This is also proved by the fact that Google has an opening for Game Developers on it's US jobs website. One of our authors had already predicted this.

Here is a screen shot for the same: 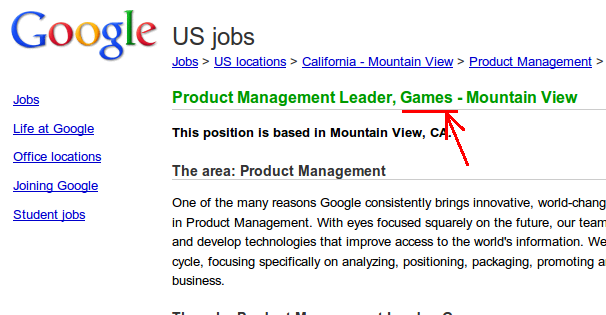 It would be interesting to watch for Facebook's next step in Social media 🙂 An user at the webmasterfoums has already expressed his concern over privacy, that with Google now owning a piece of Zynga and Zynga being in nearly everyone's Facebook it seems the long tentacle of Google is extending into everything that can yield user data.

Google To Launch Social Games – In Association With Zynga was originally published on Digitizor.com on July 12, 2010 - 2:21 am (Indian Standard Time)